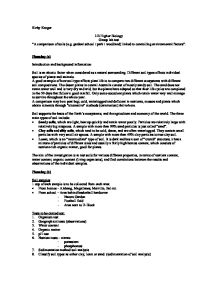 Kirby Kruger I.B Higher Biology Group lab test "A comparison of soils (e.g. garden/ school / park / woodland) linked to controlling environmental factors". Planning (a) Introduction and background information Soil is an abiotic factor when considered as a natural surrounding. Different soil types affects individual species of plants and animals. A good example of how soil type affects plant life is to compare two different ecosystems with different soil compositions. The desert plains in central Australia consist of mostly sandy soil. The sand does not retain water well and is very dry and arid, but the plants have adapted so that their life cycles are completed in the 30 days that follow a good rainfall. Only some succulent plants which retain water very well manage to survive throughout the whole year. A comparison may be a peat bog; cold, waterlogged and deficient in nutrients, mosses and plants which obtain minerals through "alternative" methods (carnivorism) thrive here. Soil supports the basis of the Earth's ecosystems, and the agriculture and economy of the world. The three main types of soil include: * Sandy soils, which are light, heat up quickly and retain water poorly. Particles are relatively large with relatively big airspaces. A sample with more than 90% sand particles is just called "sand". * Clay soils and silty soils, which tend to be cold, dense, and are often waterlogged. They contain small particles with very small air spaces. A sample with more than 40% clay particles is true clay soil. * Loam, which is an "intermediate" type of soil. It is dark and has a sort of "crumb" structure; it has a mixture of particles of different sizes and usually a fairly high humus content, which consists of nutrient-rich organic matter, good for plants. ...read more.

The sample taken from the area behind the basketball court was quite shady, with sparse plant life and some pollution. It consisted mostly of gravel and clay, and had a 9.2% water content. Earlier data suggests that this is quite healthy soil; with a humus percentage of about 3.2, it seems like it should support more life. Perhaps a factor which has not been investigated has influenced this, such as a lack of sunlight. The nature garden has a 4.8 % humus content, about 12% of its mass was water, and consisted mostly of gravel, coarse sand and fine sand - no clay. The sample did not seem to support much life, but the area around it is quite lush and green; it seems to be a favorable soil sample. The soil sample taken from the football field had a lot of roots in it, and I believe this is the reason for its very high water content. Mostly gravel and loam, it supported a fair distribution of green grass, and looked healthy; with a humus percentage of 3, it probably is a favorable kind of soil. The area next to the D-Block had the highest humus percentage, had quite a lot of clay, but just a little more gravel. It did not support much life, and the plant life around it, although plentiful, seemed somewhat strained. It should be a healthy sample; perhaps there is not enough nutrients in the soil to support all the plants. It would be extremely valuable to this project to know the nutritional value of the soil samples, but from the available data, it seems that the most favorable soil samples are airy, humus, and are capable of retaining quite a lot of water. ...read more.