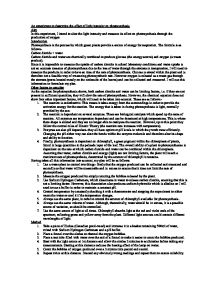 An experiment to determine the effect of light intensity on photosynthesis.

An experiment to determine the effect of light intensity on photosynthesis Aim In this experiment, I intend to alter the light intensity and measure its effect on photosynthesis through the production of oxygen Introduction Photosynthesis is the process by which green plants provide a source of energy for respiration. The formula is as follows- Carbon dioxide + water Carbon dioxide and water are chemically combined to produce glucose (the energy source) and oxygen (a waste product). Since it is impossible to measure the uptake of carbon dioxide in school laboratory conditions and water uptake is not an accurate measure of photosynthesis due to the loss of water through the stomata in transpiration, I will need to measure the products in order to have an idea of the rate of photosynthesis. Glucose is stored within the plant and is therefore not a feasible way of measuring photosynthetic rate. However oxygen is released as a waste gas through the stomata (pores located mostly on the underside of the leaves) and can be collected and measured. I will use this information to formulate my plan. Other factors to consider As the equation for photosynthesis shows, both carbon dioxide and water can be limiting factors, i.e. ...read more.

The results are shown below. Tables shown here My preliminary work has enabled me to determine the optimum levels of temperature and sodium hydrogen carbonate (i.e. carbon dioxide). From the table, I can see that the temperature should be controlled at 20�C - the optimum temperature for enzymes in this particular plant. After this temperature the enzymes begin to be denatured. Also, I will add 2.5% sodium hydrogen carbonate to the water. After this level extra sodium hydrogen carbonate will have no effect on the rate of photosynthesis because carbon dioxide is no longer a limiting factor. Adding more might adversely affect the pH balance of the water. Prediction My background research has led me to make the following prediction: Increasing the light intensity will increase the rate of photosynthesis, assuming that all other factors are not limiting. This is because a higher light intensity provides more energy for the reaction to go ahead. Furthermore, I predict that doubling the light intensity will double the rate of photosynthesis, because the molecules will have twice as much energy and therefore will collide with twice as much force and hence the reaction will proceed at twice the rate. ...read more.

Also as I have previously discussed, the heat given off by the lamp could have affected the results by varying the temperature that the plant was exposed to. I could have prevented this by using a sheet of glass Perspex that was thin enough to allow the light to pass through unhindered, but would still absorb much of the heat energy. For further work, I would like to pick up on one or two of the factors which I have already mentioned. Firstly, I have found out that chlorophyll absorbs light at different wavelengths. I could investigate the effect of different wavelengths on photosynthesis. This might give me an indication as to whether or not the wavelength of the light was the cause of my graph not levelling off. I would expect, if I used a red light source, the graph would level off fairly quickly because all of the light would be being absorbed and used effectively. In conclusion, I believe that the results I have gained in this investigation are extremely reliable due to the use of a computer simulation. As discussed, in the lab, my method has many sources of error, but if I were to repeat this investigation I would make the changes suggested above to try to eliminate the possible sources of error as far as possible. ...read more.