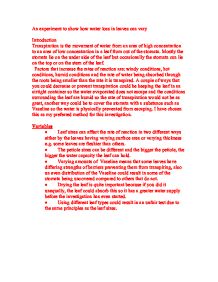 An experiment to show how water loss in leaves can vary.

An experiment to show how water loss in leaves can vary Introduction Transpiration is the movement of water from an area of high concentration to an area of low concentration in a leaf from out of the stomata. Mostly the stomata lie on the under side of the leaf but occasionally the stomata can lie on the top or on the stem of the leaf. Factors that increase the rates of reaction are: windy conditions, hot conditions, humid conditions and the rate of water being absorbed through the roots being smaller than the rate it is transpired. A couple of ways that you could decrease or prevent transpiration could be keeping the leaf in an airtight container so the water evaporated does not escape and the conditions surrounding the leaf are humid so the rate of transpiration would not be as great, another way could be to cover the stomata with a substance such as Vaseline so the water is physically prevented from escaping. I have chosen this as my preferred method for this investigation. Variables * Leaf sizes can affect the rate of reaction in two different ways either by the leaves having varying surface area or varying thickness e.g. ...read more.

Finally the leaves will be left, hanging by some string off their petioles, this is done so that the air can access all areas of the leaf and they are not restricted to transpire. I am using Vaseline because it is reasonably good at preventing transpiration when used properly. Results leaf Mass(g) Area(cm2) Mass after 6 days(g) Percentage change of mass (%) (negative change) 1 1.9 69 0.58 69.5 2 2.0 76 1.41 29.5 3 2.2 74 ------ ------ 4 2.1 72 1.05 50 Analysis of data There is no noticeable pattern that strikes you at first from looking at the data. Except for the obvious fact on the second graph that all of the leaves have less mass than before the six days. I have however noticed a very strong pattern that have all of the data following the rule and that is that the percentage changes all increase by roughly 20 % each time. Despite having such good results fro this pattern, I think it is actually a coincidence since had the missing result (number 3) been present then the pattern would have been broken. Conclusion The data I have collected has had some positive results in relation to my prediction, number 2 was the most effective method of preventing transpiration, it had Vaseline on the underside of the leaf. ...read more.

Also the conditions that the leaves are kept in, can have an effect on the rate of transpiration e.g. leaves left by the window or radiator would have different results than those that are not kept in these conditions. As you want to get the true results these are not helpful conditions to keep the leaves in. the size and type of leaf can have a big effect on the results as different leaf types can differ greatly, different plants can have more or less water capacity than others so this is an unfair test. Even if you have leaves from the same type of plant, if they are from different plants then there is a possibility that the two different plants were watered at differing times meaning that they have a greater amount of water absorbed into the cells. The leaves also need to be the same size in both surface area and thickness and have the same size petioles due to differing water capacities resulting again in impaired results. The way that the surface area was worked out was by estimating roughly how many cm2 were on the leaf. In conclusion I did not get completely accurate results but the showed generally what would happen to the rates of reaction. ...read more.

A good essay overall. The method is a little confusing in places but bullet points could help to clarify this.

The writer needs to extend their evaluation in order enhance their writing. A little more explanation would help in this area.