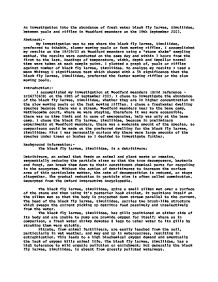 An investigation into the abundance of fresh water black fly larvae, Simuliidae, between pools and riffles in Woodford meanders on the 19th September 2003.

Overall, this is an impressive report of an investigation into the effect of stream velocity on the abundance of black fly larvae. The writer carried out detailed research into the ecology of the larvae and used this to formulate hypothesis and predictions. Variables were discussed in some detail and the methodology used was thoroughly justified.

The overall essay could be improved by making a number of minor changes or additions as follows:

[1] At times, the report lacks conciseness being repetitive and unnecessarily long in some sections.
[2] The term 'abundance' needs to be explained more fully and a more rigid approach to measuring it undertaken when sampling the larvae.
[3] The statistical test results need a fuller explanation, enabling the reader to understand why the data supported the hypothesis.
[4] A more thorough examination of the data is needed beyond the stats tests. The fact that the graphs were not displayed in this pdf version made data analysis difficult to follow.

Overall, however, this is a thorough piece of scientific research which was, on the whole, well reported.