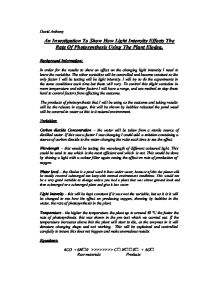 An Investigation To Show How Light Intensity Effects The Rate Of Photosynthesis Using The Plant Elodea.

David Anthony An Investigation To Show How Light Intensity Effects The Rate Of Photosynthesis Using The Plant Elodea. Background Information; In order for the results to show an effect on the changing light intensity I need to know the variables. The other variables will be controlled and become constant so the only factor I will be testing will be light intensity. I will try to do the experiments in the same conditions each time but these will vary. To control this slight variation in room temperature and other factors I will have a range, and use method so stop these hard to control factors from effecting the outcome. The products of photosynthesis that I will be using as the outcome and taking results will be the release in oxygen, this will be shown by bubbles released the pond weed will be covered in water as this is it natural environment. Variables; Carbon dioxide Concentration - the water will be taken from a sterile source of distilled water. If this was a factor I was changing I could add a solution containing a source of carbon dioxide to the water changing the ratio each time to see the effect. Wavelength - this would be testing the wavelength of different coloured light. This could be used to see which is the most efficient and which is not. This would be done by shining a light with a colour filter again seeing the effect on rate of production of oxygen. Water level - the Elodea is a pond weed it lives under water, because of this the planet will be totally covered submerged too keep with normal environment conditions. This would not be a very good variable to change unless you had a plant that was above ground level and then submerged or a submerged plant and give it less water. Light intensity - this will be kept constant if it was not the variable, but as it is it will be changed to see how the effect on producing oxygen, showing by bubbles in the water, the rate of photosynthesis in the plant. ...read more.

* Thermometer - to make sure water is at required value, in both test tube and beaker. * Test tube rack - to hold the test tube while experiment is being set up and to place after each experiment to make sure no distance merges with the other distance. * Meter ruler- so measurements are accurate the distance taken from the edge of the beaker which test tube is placed in (measured from the light bulb). * Knife - this is to cut the Elodea to 5 cm in length each time (using same piece of Elodea for final experiment.) * Cutting board - this was used so the work surface was not damaged in cutting the plant. Readings and number of readings; I will be taking around three result for each lengths of the wire however if there is an anomalies the whole lengths for that go will be redone to make sure the readings are correct. The suspected anomalies are going to be any data that goes to far from the other collected data and may change the figure when rounding later in the analysis. The data will be collected to 2 decimal places as the reading on the voltage meter and ammeter will only go that far with in a sensible boundary. This means however it might have some influence on the results, a more accurate way is needed with more figures and the digital output longer. Prediction; The resistance of wire should depend on the variable chosen to control but the length. When electrons travel through the wire they will collide with particles slowing the electron down. When they collide they use energy up and the voltage increases, as more energy is required to make the electrons move. This should means the longer the piece of wire the more collisions that will that place during the circuit. When the wire is short but thick in diameter the electrons will travel through using up less energy and colliding less, as they all travel through the distance and get through quicker. ...read more.

If it was lower it would give a slightly lower result with no indications through the method suggested or show up until all the result have been sorted and calculations made on the data. The other difficulty I can think about would be the movement of the wire and the crocodile clip, if it were not placed exactly on the same length each time the display may flicker and add a value on or way. The data collected was also taken from the digital out put however this out put was changing or flicking from different values. It was taken on my discretion, the result I chose was that which it seemed to stay on the most or the highest value if roughly the same. Information collected in this experiment could be compared with data of other resistance of wires to see if the resistance or gradient of the line if graphs were drawn, was the same or if it was completely random from metal to metal. This would help decide how resistant the wire becomes and if extended the length and it discontinuation or continued. The other interesting things to continue with the experiment would be the connection of other alloys and their relationship with themselves, and heavier and lighter alloys of the same type. The data collected and compared would then be used to see how effective the alloy is at resistance and how far this resistance extents till it is all off one metal or the other. This extra work would make sure the length is constant for all wires, also comparing with alloys and their effect on the gradient would be noted on how much the compound changes the resistance. This work would make the information gather from this experiment valid and help find out the effect on changing the concentration of metals. The experiment followed the original prediction and with only a slight waver with length 0.7 meters the true vale was almost completely correct and could only be made clearer of error if more accurate measurement equipment was available. ...read more.