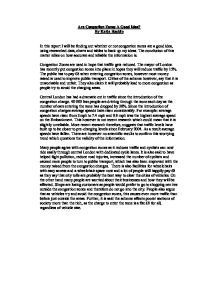 Are Congestion Zone a Good Idea?

Are Congestion Zones A Good Idea? By Katja Rackin In this report I will be finding out whether or not congestion zones are a good idea, using researched data, charts and tables to back up my ideas. The conclusion of this matter relies on how accurate and reliable the information is. Congestion Zones are used in hope that traffic gets reduced. The mayor of London has recently put congestion zones into place in hopes they will reduce traffic by 15%. The public has to pay �8 when entering congestion zones, however most money raised is used to improve public transport. Critics of the scheme however, say that it is unworkable and unfair. They also claim it will probably lead to more congestion as people try to avoid the charging areas. Central London has had a dramatic cut in traffic since the introduction of the congestion charge. ...read more.

There is also facilities for wheelchairs with easy access and a wheelchair space now and a lot of people will happily pay �8 as they say that city tolls are probably the best way to clear the cities of vehicles. On the other hand many people are worried about their businesses and how they will be affected. Shops are losing customers as people would prefer to go to shopping centres outside the congestion zones and therefore do not go into the city. People also argue that as vehicles try and avoid the congestion zones, this causes even more traffic than before just outside the areas. Further, it is said the scheme affects poorer sections of society more than the rich, as the charge to enter the zone is a flat �8 for all, regardless of vehicle size. Here is some data from a newspaper article about the levels of nitrogen oxides by the roadside. ...read more.

Children and people with lung diseases such as asthma and people who work or exercise outside are susceptible to adverse effects of smog, such as damage to lung tissue and reduction in lung function. The information above is scientifically proven which confirms the validity and reliability of the data. It also shows that congestion charges could help to control the traffic, therefore controlling the amount of air pollution. In conclusion I think congestion zones are a good idea as they help control the city traffic. With the money raised from the congestion charges the cities can improve their public transport and improve wheelchair facilities. The congestion zones have also helped fight pollution and reduced road injuries. The risk of smog has been reduced as there is less nitrogen oxides by the roadside with less city traffic. I therefore think congestion zones are a good idea as they have made many improvements to cities and they help reduce health risks. Appendix: * http://news.bbc.co.uk/1/hi/talking_point/1431849.stm * GCSE gateway science - info about congestion zones * http://en.wikipedia.org/wiki/Nitrogen_oxide ...read more.