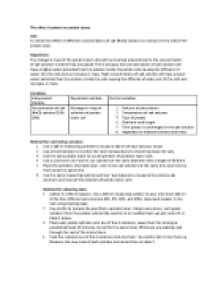 Assess the effect of different concentrations of salt (NaCl) solution on osmosis in the cells of the potato tuber.

Label each beaker in the rack using masking tape. 2. Use a knife to remove the peel from a potato tuber. Using a core borer, cut 4 good cylinders from the potato cylinder (be careful no to muddle them up) and record it in table 1 below. 3. Place each potato cylinder onto one of the 4 solutions. Leave them for as long as possible (at least 30 minutes, but all for the same time). While you are waiting read through the rest of the instructions. 4. Take the cylinders out of the 4 solutions and dry them ? be careful not to mix them up Measure the new mass of each cylinder and record this on table 1. Percentage in mass = New mass ? Original mass x 100 Original mass 1. Complete table 2 (overleaf) with your data and those of the groups. ...read more.