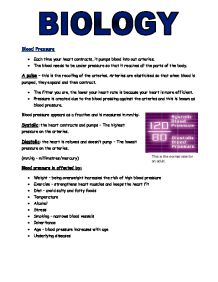 Blood Pressure * Each time your heart contracts, it pumps blood into out arteries. * The blood needs to be under pressure so that it reaches all the parts of the body. A pulse - this is the recoiling of the arteries. Arteries are elasticised so that when blood is pumped, they expand and then contract. * The fitter you are, the lower your heart rate is because your heart is more efficient. * Pressure is created due to the blood pressing against the arteries and this is known as blood pressure. Blood pressure appears as a fraction and is measures in mmHg: Systolic: the heart contracts and pumps - The highest pressure on the arteries. Diastolic: the heart is relaxes and doesn't pump - The lowest pressure on the arteries. (mmHg - millimetres/mercury) Blood pressure is affected by: * Weight - being overweight increases the risk of high blood pressure * Exercise - strengthens heart muscles and keeps the heart fit * Diet - avoid salty and fatty foods * Temperature * Alcohol * Stress * Smoking - narrows blood vessels * Inheritance * Age - blood pressure increases with age * Underlying diseases High Blood Pressure Can cause: * An artery to burst * A stroke * A heart attack * Death High blood pressure means that the blood is pushing too hard against the artery walls. This damages the artery lining and allows fat and calcium to build up and form a plaque. This narrows the artery and reduces/blocks the blood flow. Having a reduced flow puts a strain on the heart because it is pumping too hard and all the force of the pumps could cause the artery and blood vessels to burst. If this happens in the brain, a stroke can occur. If the coronary arteries are blocked, a heart attack can occur. The coronary arteries are very important because they supply blood to and from the heart. ...read more.

They have red-green colour blindness which is an inherited condition. The Nervous System The central nervous system (CNS) consists of the brain and spinal cord. It is very well protected. The peripheral nervous system (PNS) connects all the body parts to the CNS - limbs etc. Nerve cells are called neurones. Lots of neurones group together to form nerves. Nerves carry electrical impulses around the body to and from the CNS. Neurones are specialised cells. They are adapted to carry electrical impulses very fast. They are very long and have an insulating layer (myelin sheath). They have branched endings called dendrites. Neurones - carry information between receptors, CNS and effectors Effectors - muscles and glands Myelin Sheath - insulates the neurone from neighbouring cells and increases the speed of transmission of a nerve impulse. Sensory neurones - carry electrical impulses from receptors to the CNS. The cell body in a sensory neurone is in the middle and the nerve fibres extend on either side. Motor neurones - carry electrical impulses from CNS to effectors. Synapses and Reflexes Synapse: connects neurones: * Neurones pass impulses to each other but they don't actually touch each other, there are gaps between them. * The gap between two adjacent neurones is called the synapse In the nerve ending of presynaptic neurones, there are hundreds of tiny vesicles containing a chemical called transmitter substance (neurotransmitter). When an impulse reaches the nerve ending, vesicles fuse with the cell membrane and empty the transmitter substance into the synaptic cleft. The transmitter substance diffuses across the synaptic cleft and binds with the receptor molecules in the next neurone. This triggers an electrical impulse in the next neurone. Whenever there is a connection between 2 neurones, one of them has the vesicles and the other has the receptors because the impulse can only go in 1 direction. The vesicles are in the presynaptic neurone and the receptors are in the post-synaptic neurone. ...read more.

Phenotype The observable physical or biochemical characteristics of an organism, as determined by both genetic makeup and environmental influences. Punnett square The Punnett square is a diagram that is used to predict an outcome of a particular cross or breeding experiment. Pure-breeding A pure strain obtained through many generations of controlled breeding for desirable traits Recessive An allele that does not produce a characteristic effect when present with a dominant allele. Sex chromosomes A chromosome involved with determining the sex of an organism, typically one of two kinds Sexual reproduction The production of new living organisms by combining genetic information from two individuals of different sexes. Variation A modification in structure, form or function in an organism, deviating from other organisms of the same species or group. Boy or Girl Somatic (body) cells have 23 pairs of chromosomes. The 23rd pair determines the sex of the person. Females have XX chromosomes and males have XY chromosomes. Hermaphrodites have YY chromosomes. Genetic diagrams can be used to find the chance that sexual reproduction will produce a male or a female. There are 2 ways of showing how chromosomes can cross: A Punnett Square: Female Chromosomes Male Chromosomes X Y X XX XY X XX XY 50% chance of a girl and 50% chance of a boy. XX XY XX XY XX XY Inherited Disorders Chromosomes come in pairs, one from the mother and one from the father. Homologous refers to the 2 chromosomes you inherit from your parents. Rules for genetic Diagrams 1. Show the phenotypes and genotypes of the parents 2. Use a capital letter to represent the dominant allele and a lower case letter to represent the recessive allele 3. Put gametes in circles 4. Show all the possible combinations of the alleles during fertilisation 5. Put an X to show mating Monohybrid Cross This is used to study the inheritance of a characteristic from 1 generation to the next. A monohybrid cross to show how brown eye colour is inherited: Parents' Phenotypes: Brown eyes X Blue eyes Parents' Genotypes: BB X bb Gametes' Genotypes: B b ...read more.

This is a very comprehensive revision booklet for gcse biology. All areas are covered although as it is a revision booklet some areas do not go into a lot of detail. However there is a long and detailed section on the eye. This is ideal for a student who is nearing the end of their course looking for additional revision material 5 stars