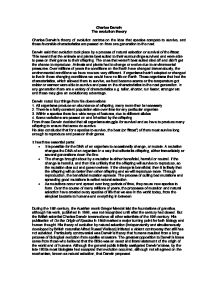 Charles Darwin The evolution theory Charles Darwin's theory of evolution centres on the idea that species compete to survive, and those favorable characteristics are passed on from one generation to the next. Darwin said that evolution took place by a process of natural selection or survival of the fittest. This meant that the animals and plants best suited to their surroundings survived and were able to pass on their genes to their offspring. The ones that weren't best suited died off and didn't get the chance to reproduce. Animals and plants had to change or evolve due to environmental pressures. Over millions of years the conditions on the Earth have changed tremendously, the environmental conditions we have now are very different. ...read more.

Some variations are passed on and inherited by the offspring From these Darwin decided that all organisms struggle for survival and so have to produce many offspring to ensure that some do survive. He also concluded that for a species to survive, the best (or 'fittest') of them must survive long enough to reproduce and pass on their genes. It has three essential parts: * It is possible for the DNA of an organism to occasionally change, or mutate. A mutation changes the DNA of an organism in a way that affects its offspring, either immediately or several generations down the line. * The change brought about by a mutation is either beneficial, harmful or neutral. ...read more.

But the British scientist Charles Darwin towers above all other scientists of the 19th century. His publication of On the Origin of Species in 1859 marked a major turning point for both biology and human thought. His theory of evolution by natural selection (independently and simultaneously developed by British naturalist Alfred Russel Wallace) initiated a violent controversy that still has not subsided. Particularly controversial was Darwin's theory that humans resulted from a long process of biological evolution from apelike ancestors. The greatest opposition to Darwin's ideas came from those who believed that the Bible was an exact and literal statement of the origin of the world and of humans. Although the general public initially castigated Darwin's ideas, by the late 1800s most biologists had accepted that evolution occurred, although not all agreed on the mechanism, known as natural selection, that Darwin proposed. ...read more.