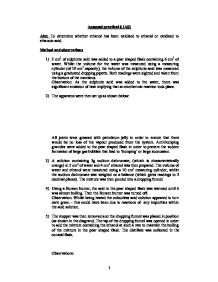 Assessed practical 6 (AS) Aim: To determine whether ethanol has been oxidised to ethanal or oxidised to ethanoic acid. Method and observations 1) 2 cm3 of sulphuric acid was added to a pear shaped flask containing 6 cm3 of water. Whilst the volume for the water was measured using a measuring cylinder (of 10 cm3 capacity), the volume of the sulphuric acid was measured using a graduated dropping pipette. Both readings were sighted and taken from the bottom of the meniscus. Observation: As the sulphuric acid was added to the water, there was significant emission of heat implying that an exothermic reaction took place. 2) The apparatus were then set up as shown below: All joints were greased with petroleum jelly in order to ensure that there would be no loss of the vapour produced from the system. ...read more.

The mixture was then poured into a dropping funnel. 4) Using a Bunsen burner, the acid in the pear shaped flask was warmed until it was almost boiling. Then the Bunsen burner was turned off. Observation: Whilst being heated the colourless acid solution appeared to turn dark green - this could have been due to reactions of any impurities within the acid solution. 5) The stopper was then removed and the dropping funnel was placed in position (as shown in the diagram). The tap of the dropping funnel was opened in order to add the mixture containing the ethanol at such a rate to maintain the boiling of the mixture in the pear shaped flask. The distillate was collected in the conical flask. ...read more.

of 2,4-dinitrophenylhydrazine was added to a test tube. Then 5 drops of the distillate were cautiously added. Observations were recorded in the table below. Test 2 - Testing for the presence of an acid group to determine whether ethanoic acid has been formed 5 drops of universal indicator were added to a test tube containing 5 drops of the distillate and the observations were then recorded in the table below. Test Observation Result Deduction 1 A relatively large amount of yellow/orange precipitate was formed Positive Most of the distillate has a carbonyl group whch is therefore the aldehyde, ethanal. 2 Red Positive Some of the distillate has an acid group which is therefore the carboxylic acid, ethanoic acid. Evidently some of the ethanal produced was furthermore oxidized. 1 ...read more.