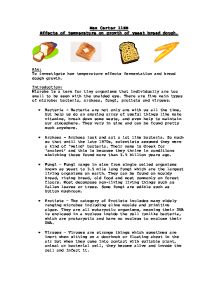 Effects of temperature on growth of yeast bread dough.

Max Carter 11EB Effects of temperature on growth of yeast bread dough. Aim: To investigate how temperature effects fermentation and bread dough growth. Introduction: Microbe is a term for tiny organisms that individually are too small to be seen with the unaided eye. There are five main types of microbe: bacteria, archaea, fungi, protists and viruses. * Bacteria - Bacteria are not only are with us all the time, but help us do an amazing array of useful things like make vitamins, break down some waste, and even help to maintain our atmosphere. They vary in size and can be found pretty much anywhere. * Archaea - Archaea look and act a lot like bacteria. So much so that until the late 1970s, scientists assumed they were a kind of 'weird' bacteria. Their name is Greek for 'ancient' and this is because they thrive in conditions mimicking those found more than 3.5 billion years ago. * Fungi - Fungi range in size from single celled organisms known as yeast to 3.5 mile long fungi which are the largest living organisms on earth. They can be found on mouldy bread, rising bread, old food and most commonly on forest floors. Most decompose non-living living things such as fallen leaves or trees. Some fungi are edible such as button mushroom. * Protists - The category of Protists includes many widely ranging microbes including slime moulds and primitive algae. They are all eukaryotic organisms, meaning their DNA is enclosed in a nucleus inside the cell (unlike bacteria, which are prokaryotic and have no nucleus to enclose their DNA. ...read more.

* Pushing the dough down the same amount in the measuring cylinder. * Recording the rise in dough at the same times for each test. * Only ever change one factor. If I stick to these three things I know my test will be fair and so I will obtain a good set of results for which I can draw a graph which will help me to analyse my results, however as the yeast dough will be made before I do my experiments it will already have started rising before I can leave it at the right temperature. Although it should not affect my investigation too much, I can not avoid this problem but to try to minimise it will try to make the time in-between it's made and when I do my tests as small as possible. It will be kept safe by me making sure that the water bath which keeps the dough at certain temperatures is in the centre of the table as a spillage of hot water could cause a nasty burn. Changed Factors Controlled factors (kept same) Measured Factors Temperature Volume of dough Growth of dough Water bath volume pH values Here is a table showing my factors I will change, keep the same (control) and measure. I will now Predict what I think will happen in this experiment: Prediction: I predict that the fermentation will occur fastest between temperatures 30 - 40�C and so the volume of yeast will be biggest after 30 minutes with dough that has been kept at these temperatures. ...read more.

Therefore my prediction was correct as I stated that the best temperature for the yeast would be 30�C and it was as I just said above. My prediction was also correct when I said about the further away from the optimum temperature of the yeast, the less carbon dioxide bubbles the yeast will produce. I know this part was correct as the volumes of the dough decreased as the temperature got higher after 30?C and the dough volumes increased from the starting volume to when it got to 30?C. For example there is a noticeable difference between 20 - 30?C (with a maximum volume difference of 16 cm3) and also a difference between 48?C and 58. The 20?C temperature did not ferment and make the dough grow very well because yeast requires more heat so that it can respire and give off carbon dioxide bubbles which make the dough rise. At the higher temperatures the dough begins to collapse. This is because the heat becomes too much for the yeast and causes them to denature and the production of Carbon Dioxide stops allowing carbon dioxide bubbles to escape which leads to the dough collapsing on itself and losing volume, as shown in my results table for the 30 minute volume of the 58?C test. Evaluation: From looking at my results I cannot see too many flaws in the results but there is one which is not as it should be. In the 40?C water bath between times 15 and 20 minutes, the dough is growing well until it collapses on itself after reaching 94cm3. It then loses volume and quickly becomes 82cm3 as it was on the 10 minute reading. ...read more.