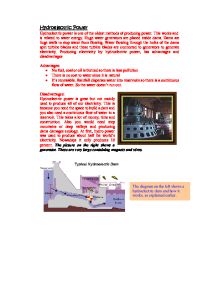 Electric generators inside a dam.

Hydroelectric Power Hydroelectric power is one of the oldest methods of producing power. This works and is related to water energy. Huge water generators are placed inside dams. Dams are huge walls to stop water from flowing. Water flowing through the holes of the dams spin turbine blades and these turbine blades are connected to generators to generate electricity. Producing electricity by hydroelectric power, has advantages and disadvantages Advantages: * No fuel, coal or oil is burned so there is less pollution * There is no cost to water since it is natural * It's renewable. Rainfall disperses water into reservoirs so there is a continuous flow of water. So the water doesn't run out. Disadvantages: Hydroelectric power is great but not mainly used to produce all of our electricity. This is because you need the space to build a dam and you also need a continuous flow of water in a reservoir. This takes a lot of money, time and construction. Also you would need step mountains or deep valleys and producing dams damages ecology. At first, hydro power was used to produce about half the world's electricity. Nowadays it only produces 10 percent. ...read more.

But these are obviously built where winds are strongest. Wind energy is used all around the world mostly in Europe. It is quite cheap to use because wind is a natural source in the environment. This is why people may prefer to use it. At times wind can become strong and the electricity would increase. Winds can become strong near the tropics and often becomes focused into a spiral. When winds reach very high speeds, cyclones could be formed. Geothermal Resources Geothermal energy is a renewable source of energy and can be used to produce heat as well as electricity. Our earth's interior provides warmth (heat energy). The energy can produce power without polluting the environment. The heat from the earth's core is first conducted to the magma. This magma transfers the heat to the earth's crust through convection. The magma heats the water and land. Today, drilling brings hot water to the surface. Once the water is recovered, it can be used to produce energy saving electricity. In geothermal power plants, the steam from the hot water provides enough energy to spin turbines which are connected to generators and then the electricity is distributed through houses and offices. ...read more.

These systems can also be used to keep a pool warm. A solar heating system gives out less pollution than a normal conventional heating system. This is because natural gas and oil, which are burned to heat our homes and water, are limited. Even electric water and space heaters cause air pollution indirectly, because coal and natural gas are burned to produce electricity in large power plants. So if more people begin to use solar heating systems, the amount of pollution would decrease. Solar Cells As said before, the sun is very useful. Another thing which is used is called the solar cell which attracts sunlight to produce electricity. Solar cells contain semi-conducting materials that transfer heat and light into electricity but otherwise act as an insulator. These cells are called photovoltaic cells, also known as PV cells. It is very compatible in areas that don't have electric wires because they need electricity for their homes. The PV units usually involve using a meter, deep cycle batteries, and a regulator, to prevent over charging. An AC inverter is needed if you want to run ac appliances and lights. The concept of using solar power for heat and electricity has become popular nowadays. ...read more.