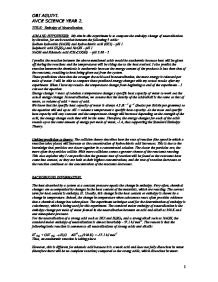 TITLE: Enthalpy of Neutralisation. AIM AND HYPOTHESIS: My aim in this experiment is to compare the enthalpy change of neutralisation by titration, for each reaction between the following 3 acids: Sodium hydroxide (NaOH) and hydrochloric acid (HCl) - pH 1 Sulphuric acid (H2SO4) and NaOH - pH 1 NaOH and Ethanoic acid (CH3COOH) - pH 2.88 - 3 I predict the reaction between the above-mentioned acids would be exothermic because heat will be given off during the reactions and the temperatures will be rising due to the heat evolved. I also predict the reaction between the chemicals is exothermic because the energy content of the products is less than that of the reactants, resulting to heat being given out from the system. These predictions show that the stronger the acid used in neutralization, the more energy is released per mole of water. I will be able to compare these predicted energy changes with my actual results after my experiment. When I have my results- the temperature change from beginning to end of the experiment - I can use the equation Energy change = mass of solution x temperature change x specific heat capacity of water to work out the actual energy change. In neutralization, we assume that the density of the acid/alkali is the same as that of water, so volume of acid = mass of acid. We know that the specific heat capacity of water is always 4.2 Jk - 1 g -1 (Joules per Kelvin per gramme) so the equation will end up as ?H = volume x temperature x specific heat capacity. As the mass and specific heat capacity will stay constant and the temperature change will increase depending on the strength of the acid, the energy change each time will be the same. Therefore, the energy changes for each of the acids rounds up to the same amount of energy per mole of water, -1.4, thus supporting the Standard Enthalpy Theory. ...read more.

They are at a large distance from each other in the periodic table (groups 1 and 6) and therefore are both very reactive. However, sodium is more reactive than sulphate because it only needs to lose one electron, while sulphide needs to gain two electrons. This means that in the compound that is formed consists of two sulphide ions for every one sodium ion. The ionic relation of the sodium and sulphide is the same as the ionic relation between sulphuric acid and sodium hydroxide. If the substances are pure than the ratio of sulphuric acid to sodium hydroxide is 1:2 and so for neutralization to occur there needs to be twice as much sulphuric acid as sodium hydroxide. Acids that form one H+ ion from each acid molecule are called monopratic acids, two acid molecules- diprotic, and three- triprotic. A strong acid or alkali is always strong even if it is diluted, e.g. hydrochloric acid mixed with water would be called a strong dilute substance. A base like ammonia will always be a weak one because it has a sparse ionic arrangement. The concentration of a substance and the strength of them are only relevant when relating to ionic concentration- not the amount of substance dilution. A pH scale looks like this: The numbers from 0-6 means it is an acid, and the stringer the acid the lower the number is. Number 7 means it is Neutral and number 8-14 means it is an alkali, and the stronger the alkali the higher the number. HEAT OF REACTION (BOND MAKING AND BOND BREAKING). Neutralisation reactions are also exothermic, meaning they emit heat. In this reaction, bonds are formed between the acid and alkali, and bond making is exothermic. This is because the energy needed to break the bonds is less than energy given out when bond is formed. Energy needed to break bonds < Energy given out when bond is formed = Exothermic. ...read more.

x 100 -57.1 1 = EVALUATION. I stirred the chemicals in the calorimeter cup with the thermometer so as to make an even distribution of heat. Looking at my results for the second experiment, I believe I had a high figure because the heat escaped (it made it less exothermic) because there was no cover for the calorimeter cup to prevent heat from evaporating. I also think I had a high figure for Experiment 2 because while taking the burette reading, I did not take the volume at eye level. Therefore, there was error due to parallax. I think this was a difficulty for me (constraint). Also, for the first experiment, I had a higher result than -57.1 kJ mol-1 and I should have repeated the experiment for an average accurate reading, but there was time to do it. The experiment was only performed once. DISCUSSION. Experiment 1: The strong acid and the strong base gives -57.1 kJ mol-1 because the acid and base fully disassociate in water. I believe reason I did not get -57.1 kJ mol-1 was because my acid and base did not fully disassociate in water. I assumed the specific heat capacity was 4.2 but I could not check the capacity and that affected heat loss. Experiment 2 is similar to Experiment 1 because the strong acid involved (Sulphuric acid) did not fully disassociate in water. In Experiment 3, I expected a lower figure because ethanoic acid is a weak acid. It does not fully disassociate in water (it is not completely ionized in solution). This is because it varies with concentration (and in this case, it was a low concentration) and it is neutralised completely by acid. This is also because the heats of neutralisation for reactions involving weak acids and/or weak bases are always negative than for strong acids and bases. OBI AGUIYI. AVCE SCIENCE YEAR 2. 1 ...read more.

*** A lengthy report that contained a lot of background material on acids/alkalis and th pH scale that was not directly linked to the problem being investigated. There was limited data collected and there appear to be errors in the figures used for the calculations.

Research and rationale
The background material was extensive but was not selected appropriately and did not link clearly to the problem under investigation. There were many errors of basic chemistry within the background material - confusing sulfur and sulfate for example. There were no references cited for the sources of the quoted enthalpy values.
Planning
A testable hypothesis was formulated but the prediction could have been made more clearly. There was too little consideration given to how the key dependent variable could be reliably recorded since heat loss in an experiment such as this is difficult to control. The apparatus was listed but not justified. Only three different acid / alkali combinations were recorded and this would not be deemed a sufficient range. To improve a table of the key variables could be constructed before the written method. A pilot experiment would be helpful. The safety assessment was not complete.
Implementing
The range of apparatus seems to have been used competently to record results but no repeats were carried out. The headings of the tables were not clear in some cases.
Analysing data
The calculations appear for some reason to have used figures that were not recorded in the tables and theses gave rise to erroneous figures for the enthalpy calculations. Trends were commented on but the possible sources of error were not considered in any depth. The evaluation would be improved by modifying the experiment or apparatus to improve reliability or by suggesting sensible extensions to the work.
Communicating
The layout of this report does not really conform to that expected of a scientific paper with appropriate subheadings. The expected sections were not in a particularly logical order. The data could have been presented more effectively in one table. The candidate would benefit from reading through the work carefully as there were some obvious typographical errors. No references were quoted