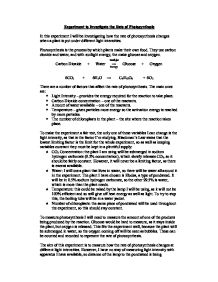 Experiment to Investigate the Rate of Photosynthesis

Experiment to Investigate the Rate of Photosynthesis In this experiment I will be investigating how the rate of photosynthesis changes when a plant is put under different light intensities. Photosynthesis is the process by which plants make their own food. They use carbon dioxide and water, and with sunlight energy, the make glucose and oxygen. Sunlight Carbon Dioxide + Water � Glucose + Oxygen Energy 6CO2 + 6H2O � C6H12O6 + 6O2 There are a number of factors that affect the rate of photosynthesis. The main ones are: ? Light Intensity - provides the energy required for the reaction to take place. ? Carbon Dioxide concentration - one of the reactants. ? Amount of water available - one of the reactants. ? Temperature - gives particles more energy so the activation energy is reached by more particles. ? The number of chloroplasts in the plant - the site where the reaction takes place. To make the experiment a fair test, the only one of these variables I can change is the light intensity, as that is the factor I'm studying. Blackman's Law states that the lowest limiting factor is the limit for the whole experiment, so as well as keeping variables constant they must be kept in a plentiful supply: * CO2 Concentration: the plant I am using will be submerged in sodium hydrogen carbonate (0.5% concentration), which slowly releases CO2, so it should be fairly constant. However, it will never be a limiting factor, as there is excess available. ...read more.

To get around this, I will have a piece of paper and pencil, and make a dot every time I see a bubble released and at the end count the dots. * I will use sodium hydrogen carbonate for the solution in which the pondweed will be placed, as a much slower bubble-rate is achieved with water, which would cause no bubbles to be released at high distances. * To measure the distance of the lamp to the pondweed, I will make a mark with chalk on the desk, in line with the centre of the pondweed, and measure to the end of the lamp. * I found that the water changes temperature when the lamp gets close, so I will monitor it. * A razor blade will be used in the experiment to cut the end of the pondweed cleanly, so care will need to be taken with this. I will need to make sure that water is not spilled near any electric sockets so there is no risk of being electrocuted. The lamp will be on for virtually all of the time the experiment is taking place, so it will get hot. I must make sure not to burn myself on it. * The closer distances should be recorded first, as they start the plant photosynthesising * The equipment I will need is: Beaker Lamp Sodium Hydrogen Carbonate Water Stand Ruler Pondweed (Elodea) Thermometer Clamp Boiling tube Chalk Paper Pencil Stopwatch I will set up the apparatus like this: Method The apparatus will be set up as shown in the diagram above. ...read more.

Carbon dioxide - the pondweed was submerged in sodium hydrogen carbonate which made excess carbon dioxide available, so this was controlled well. Temperature - I used a water bath to try to keep the temperature constant. However, it did vary a lot (8o). To improve this, an electronically controlled water bath could have been used, which would keep the temperature more constant. There are a number of pieces of apparatus I could have used to improve the results I obtained: * Thermocouple - a very accurate thermometer that works by calculating the temperature using potential difference. * A light meter could be used to measure the light more accurately. * To measure to volume of oxygen let off by the pondweed, I could have placed a measuring cylinder upside-down over the top of the pondweed, and read off at the end the volume from the measuring cylinder. With more time, as I have already mentioned, I could take more repeats and more readings at different distances. I could also take the readings for longer, and give the plant more time to acclimatise to different distances. To make the results more reliable I could have the lamp as the only light source, i.e. keep the pondweed in an unlighted room apart from the lamp. I think my evidence is sufficient to support my conclusions, because it matches almost perfectly with my predicted results. My results agree with the scientific theory I suggested. If I were to take this experiment further, I would investigate how the rate of photosynthesis changed at different temperatures. ...read more.