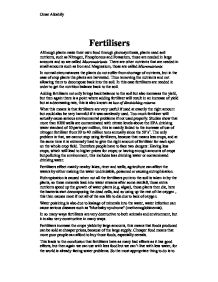 Fertilisers Although plants make their own food through photosynthesis, plants need soil nutrients, such as Nitrogen, Phosphorous and Potassium, those are needed in large amounts and so are called Macronutrients. There are other nutrients that are needed in small amounts such as Iron and Magnesium, those are called Micronutrients. In normal circumstances the plants do not suffer from shortage of nutrients, but in the case of crop plants the plants are harvested. Thus removing the nutrients and not allowing them to decompose back into the soil. In this case fertilisers are needed in order to get the nutrition balance back to the soil. Adding fertilisers not only brings back balance to the soil but also increases the yield, but then again there is a point where adding fertilizer will result in an increase of yield but at a decreasing rate, this is also known as law of diminishing returns. ...read more.

The only problem is that, we cannot stop using fertilizers, because that means less crops, and at the same time it is extremely hard to give the right amount of fertilizer for each spot on the whole crop field. Therefore people have to face two dangers: Having less crops, which will lead to higher prices for crops; or having enough amounts of crops but polluting the environment, this includes less drinking water or contaminated drinking water. Fertilizers effect mainly nearby lakes, river and wells, agriculture can affect the waters by either making the water undrinkable, poisoned or causing eutrophication. Euthropication is caused when not all the fertilizers put into the soil is taken in by the plants, so these minerals leak into water streams after some rainfall, those extra nutrients speed up the growth of water plants (e.g. ...read more.

In so many ways fertilizers are very destructive to both animals and environment, but it is also very constructive in many ways. Fertilizers increase the crops yields by large amounts, this means that foods produced can be sold at cheaper prices, because of the large supply. Cheaper food means that more poor people can afford to buy those foods, especially cereals. This leads to the conclusion that fertilizers have as many bad effects as it has good effects, but then again we can use with less food but we can't live with less water, for the world is already facing water problems. So the most appropriate thing to do is to continue using fertilizers at the lowest rate possible, but intense researches to invent new ways of knowing the right amount of fertilizer the soil needs. 1-Indge.B. ,Rowland .M. and Baker .M."A new introduction to biology" (2000) 2-http://twri.tamu.edu/twripubs/WtrResrc/v12n1/text-4.html Omar Alkahily ...read more.