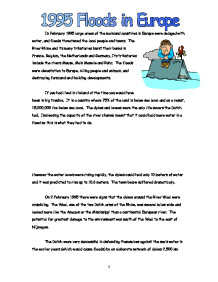 In February 1995 large areas of the mainland countries in Europe were deluged with water, and floods threatened the local people and towns. The River Rhine and its many tributaries burst their banks in France, Belgium, the Netherlands and Germany, Its tributaries include the rivers Meuse, Main Moselle and Ruhr. The floods were devastation to Europe, killing people and animals, and destroying farmland and building developments. If you had lived in Holland at the time you would have been in big trouble. It is a country where 75% of the land is below sea level and as a result, 15,000,000 live below sea level. The dykes and levees were the only life savers the Dutch had. Increasing the capacity of the river channel meant that it could hold more water in a flood so this is what they had to do. However the water levels were rising rapidly, the dykes could hold only 10 meters of water and it was predicted to rise up to 10.6 meters. ...read more.

When they started off on their journey, everyone was evacuating too, so as you can imagine the traffic was awful. It took over 8 hours for some people to arrive to their destination and by then the cows were stressed and tired. Due to their condition they didn't produce very much milk and the owners lost even more money. In some cases if you were very unlucky the people before using the trucks to carry their cattle had foot disease. So some cows caught the disease and couldn't produce any more milk, so the people lost even more money! Some of the countries had a bigger problem. If they wanted to make their dykes larger then they were going to have to knock down people's houses by the river. For some people it was a very painful process to see the house that they had spent all their lives in, being knocked down. The sad thing was they were going to loose it either way so they had no input on the decision. ...read more.

The main problem was the condition of the water, as all of it was considerably polluted, one reason for this is because floods disrupt normal drainage systems in cities, and sewage spills are common which then got into the water supply, bacteria and mold from the dampness inside the house affected the condition of the water too. People didn't know what to do. They couldn't boil the water with a kettle because if their house were flooded there would be no electricity. So the country had to import water from other countries and the people would have to buy it. It was the only way it could be handled. IF you were living in an LEDC it would be very different because they couldn't afford to import the water. The Floodwaters disrupted public and personal transport. It was a great struggle for those who were trying to earn a living. Floods cut off road and railway lines. It also affected communication, as most telephone lines get cut off or get seriously damaged. It affected the electricity and most houses lost their supply impacting their everyday life. By Georgina Keeley 10.2 Mr. Thomas. (1101 words) 1 ...read more.