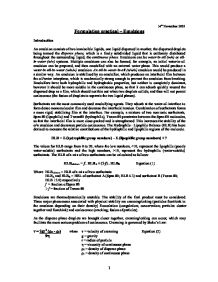 14th November 2003 Formulation practical - Emulsions Introduction An emulsion consists of two immiscible liquids, one liquid dispersed in another, the dispersed droplets being termed the disperse phase, which is a finely subdivided liquid that is uniformly distributed throughout the surrounding liquid, the continuous phase. Emulsions can be water-in-oil (w/o) or oil-in-water (o/w) systems. Multiple emulsions can also be formed, for example, an initial water-in-oil emulsion can be prepared, and then emulsified with an external water phase. This would produce a water-in-oil-in-water (w/o/w) emulsion. An oil-in-water-in-oil (o/w/o) emulsion would be produced in a similar way. An emulsion is stabilised by an emulsifier, which produces an interfacial film between the oil/water interphase, which is mechanically strong enough to prevent the emulsion from breaking. Emulsifiers have both hydrophilic and hydrophobic properties, but neither is completely dominant, however it should be more soluble in the continuous phase, so that it can adsorb quickly around the dispersed drop as a film, which should not thin out when two droplets collide, and thus will not permit coalescence (the fusion of droplets to separate the two liquid phases). Surfactants are the most commonly used emulsifying agents. They adsorb at the water-oil interface to form dense monomolecular film and decrease the interfacial tension. Combination of surfactants forms a more rigid, stabilizing film at the interface. For example, a mixture of two non-ionic surfactants, Span 80 (lipophilic) ...read more.

A total of six emulsions were prepared, two of each continuous phase provided (3% w/v, 4% w/v and 6% w/v methylcellulose). 50ml of each prepared emulsion was used in Experiment D (see ahead). The remainder of the emulsions were left to stand and the extent of creaming was measured four days later. Experiment D - The effect of homogenisation on emulsion stability Homogenisation reduces the globule size of the disperse phase, hence increases the stability of an emulsion. 50ml of each emulsion, prepared in Experiment C, was homogenised. Using a light microscope, the change in the size of the globules was determined using a light microscope. The emulsions were left to stand and the extent of homogenisation was observed four days later. The homogenised emulsions would be expected to have the least amount of creaming due to the increased amount of smaller dispersed droplets in the continuous phase. As a result, there would be an increased surface area for the emulsifier to work on, hence increasing the stability of the emulsion by reducing the amount of creaming. Increasing the number of globules, would increase the viscosity, thus increasing the stabilisation of the emulsion, from Stoke's Law. Results and Discussion Experiment A - Determination of emulsion system 1. Dilution test - the unknown emulsion diluted in water. 2. Conductivity test - the unknown emulsion conducted electricity. ...read more.

* The optimum HLB for an emulsion was found to be HLB 12. * The viscosity of the continuous medium was measured using a falling sphere viscometer and the effect of increasing the viscosity of the continuous phase was found to increase the stability of the emulsion as there is a decrease in the creaming ratio. * The effect of reducing the size of the disperse phase droplets on emulsion stability was not sufficiently found out due to experimental errors. These trends did not comply with the previous experiment. There are many ways in which these experimental errors could be improved to give a more accurate and sound result. - The small volumes of emulsion made it difficult to accurately read the creaming volume, thus creating anomalies in the trends. The volume of emulsion should then be increased. - Homogenisation should be carried out for a longer time period. This would have ensured a decrease in the size of the disperse phase droplets. - The emulsions may have been disturbed during the time they were left to stand to allow for creaming. This would have disrupted the disperse phase droplets, thus, producing misleading results. In addition, there can be further investigations that would assist understanding of emulsions: * Demonstration of phase inversion (demulsification) - from an oil-in-water to a water-in-oil system. * Measuring coalescence of disperse phase droplets in both oil-in-water and water-in-oil systems. * Introduction of other emulsifying agents - macromolecules/polymers and finely divided solid particles. * Test the limits of emulsion stability/instability - charge, electrolyte, changes in pH, oxidation. 1 ...read more.