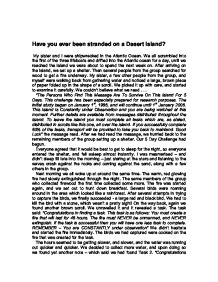 Have You Ever Been Stranded On a Desert Island?

Have you ever been stranded on a Desert Island? My sister and I were shipwrecked in the Atlantic Ocean. We all scrambled into the first of the three lifeboats and drifted into the Atlantic ocean for a day, until we reached the island we were about to spend the next week on. After arriving on the island, we set up a shelter. Then several people from the group searched for wood to get a fire underway. My sister, a few other people from the group, and myself were walking back from gathering water and noticed a large, brown piece of paper folded up in the shape of a scroll. We picked it up with care, and started to examine it carefully. We couldn't believe what we read . . . "The Persons Who Find This Message Are To Survive On This Island For 5 Days. This challenge has been especially prepared for research purposes. The initial study began on January 1st, 1986, and will continue until 1st January 2006. ...read more.

The fire must NEVER be unmanned, and NEVER extinguish. If the task is successful then you will have one less task to complete. REMEMBER - You are CONSTANTLY under observation" We didn't hesitate and started the fire immediately. The birds we had captured were cooked on the fire that was created for the task. The hours seemed to be getting slower, and slower, and the water was running out quicker and quicker. We decided to collect more water, and upon doing so we found yet another note - which said we had found Task 2. "Congratulations on finding a task. This task is as follows: You must use the materials on the island and create a Stable tent that can house up to four people easily. If you are successful this is one lest task you have to complete. REMEMBER - You are CONSTANTLY under observation" Again, we immediately undertook the task . . . We got to work as soon as we could, while the others in the group were cooking a meal. ...read more.

It was yet another task. "Congratulations on finding a task. This task is as follows: You must make a raft that will carry two people and must be able to float. You may try this out - however, if you attempt to leave the island - you will be captured and your group will be penalised. You will find large water tanks that are empty on the opposite side of the island from where you are now. You may use these along with any other materials on the island. REMEMBER - You are CONSTANTLY under observation". Three members of our group went around to the other side of the island to collect the water tanks. We attached them with rope which we found inside the water tanks to large pieces of wood we cut down from trees. It looked like this would be our most successful task yet. Two members of the group tried out this float for testing, and it appeared to float fine. We now had four tasks completed - one to go After waking up next morning, we searched for another task - but no avail. Still, until sunset we were searching for task five, but no luck. We are still searching for that task five. ...read more.