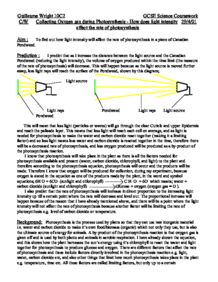 How does light intensity affect the rate of photosynthesis

I will then hold the delivery tube and the syringe up with a clamp stand to hold it still. I will then use the syringe to draw up the water from the beaker to fill the delivery tube and make sure that no air bubbles are present that may change the size of the bubble produced by the plant. I will then refill the beaker up to 750ml for each measurement. I will have taken the filter funnel out of the water while I do this to stop the oxygen released by photosynthesis in the two minutes reaching the delivery tube. I will then make sure that the lamp is 500mm away with an accurate ruler and put the filter funnel back in and time with a stopwatch for five minutes. After five minutes I will take the funnel out and use the syringe to draw the bubble up and use the scale on the side of the delivery tube to read off the length of the bubble. I will then replace the water and start the whole experiment again using the same method but moving the lamp forward 50mm and turning it on again and leaving it for five minutes and record the results again. I will then repeat this 8 more times, bringing the lamp 50mm closer each time and recording the results. I will also do the whole experiment twice again and draw up an average table for each of the ten different measurements and use this to draw a graph of my results and enable me to draw a line of best fit for my results. To gain more reliable results I will use another syringe to push an air bubble of a certain size (using the scale on the syringe) into the delivery tube and check it's length so that I can gain a ratio of length to volume of bubble so that I can convert the length of each bubble into a volume measurement for more reliable results. ...read more.

There are also more limiting factors that could have affected the accuracy of my experiment. Some of the oxygen produced by the plant is used in respiration not only by animals but by the plant itself so I would not have known the true amount given off. This would also apply to the fact that some of the oxygen would have been dissolved in the water. There were also other experiment in the classroom and my piece of pondweed could have gained extra and varying amounts of light from this. As the light was moved further away the light intensity would have been less accurate and so enhances my suggestion of the use of a dimmer switch. As I mentioned the solution to some of the problems was to change the piece of pondweed e.g. because it's rate of photosynthesis decreased over time, it would have heated up etc, but this in turn would cause a problem as it would vary the surface area of the plant and the amount of chlorophyll in the plant's cells (both factors). For extension of my experiment I would have combined this plant with other different types and created an average table from lots of varying sources to create a much more reliable overall picture of whether light intensity affects the rate of photosynthesis. I could have extended the range on the distance axis so that I could find out how this pattern evolves at the extremes of the axis and also do sections of the range in more detail e.g. more dense results every 1mm at the small end of the axis to see a more reliable pattern. I could then conclude each part of the line of best fit in more detail and explain the different stages of the experiment. I could have looked at all the other limiting factors, maybe in the same experiment so I could see the separate relationships and conclude which factor affects photosynthesis more. Finally I could investigate the precise mathematical relationship between these two factors using an equation of the line of best fit and a Spearman's Rank calculation. ...read more.