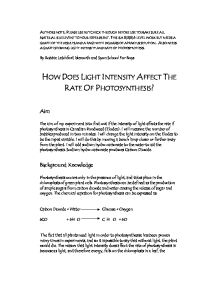 How Does Light Intensity Affect The Rate Of Photosynthesis?

AUTHORS NOTE; PLEASE USE BUT CHECK THROUGH BEFORE USE TO MAKE SURE ALL MATERIAL IS RELEVENT TO YOUR EXPERIMENT. THIS IS A 8,8,8,6 LEVEL WORK BUT NEEDS A GRAPH OF THE RESULTS AND A PAGE WITH DIGRAMS OF APPARTUS SETUP ON. ALSO NEEDS A GRAPH SHOWING LIGHT INTENSITY AND RATE OF PHOTOSYNTHESIS. By Robbie Latchford Isleworth and Syon School For Boys HOW DOES LIGHT INTENSITY AFFECT THE RATE OF PHOTOSYNTHESIS? Aim The aim of my experiment is to find out if the intensity of light affects the rate if photosynthesis in Canadian Pondweed (Elodea). I will measure the number of bubbles produced in two minutes. I will change the light intensity on the Elodea to be the input variable. I will do this by moving a bench lamp closer or further away from the plant. I will add sodium hydro carbonate to the water to aid the photosynthesis. Sodium hydro carbonate produces Carbon Dioxide. Background Knowledge Photosynthesis occurs only in the presence of light, and takes place in the chloroplasts of green plant cells. Photosynthesis can be defined as the production of simple sugars from carbon dioxide and water causing the release of sugar and oxygen. The chemical equation for photosynthesis can be expressed as: Carbon Dioxide + Water Glucose + Oxygen 6CO + 6H O C H O + 6O The fact that all plants need light in order to photosynthesise has been proven many times in experiments, and so it is possible to say that without light, the plant would die. ...read more.

As I mentioned in my planning, carbon dioxide concentration could have been an error in the experiment, however, I feel that due to the short period of time taken, there is very little chance that the concentration would ever have been so low as to have become the limiting factor. The last inaccuracy, though a small one, was in the time keeping. The main problem here was in when to begin the two minutes. If for one reading, the two minutes was started just after one bubble had been produced, and in another reading it was just before, this could have had a negative effect on the accuracy of my results. I therefore ensured that in each case I started the stopwatch just after a bubble had been produced, thus heightening the accuracy. Improvements could have been made as I have stated, mainly by simply increasing the time taken. However, due to practical time constraints in taking the readings for my investigation, and some consequential problems relating to time extension, I could not in fact make these adjustments. To extend my enquiries into the rate of photosynthesis, I could perhaps try to link in some of the other limiting factors to the same experiment, as well as investigating them in their own right. It could also be interesting to explore the effects of coloured lights on the rate of photosynthesis, which could lead to the question of whether or not other types of light, such as fluorescent lights or halogen lights, would have a different effect on the rate of photosynthesis. ...read more.