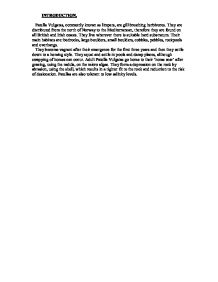 INTRODUCTION. Patella Vulgatas, commonly known as limpets, are gill breathing herbivores. They are distributed from the north of Norway to the Mediterranean, therefore they are found on all British and Irish coasts. They live wherever there is suitable hard substratum. Their main habitats are: bedrocks, large boulders, small boulders, cobbles, pebbles, rockpools and overhangs. They become vagrant after their emergence for the first three years and then they settle down to a homing style. They squat and settle in pools and damp places, although swapping of homes can occur. Adult Patella Vulgatas go home to their 'home scar' after grazing, using the radula, on the micro algae. They form a depression on the rock by abrasion, using the shell, which results in a tighter fit to the rock and reduction to the risk of desiccation. Patellas are also tolerant to low salinity levels. HYPOTHESIS. I predict that Patella Vulgatas will be more distributed on the upper eulittoral shore than on the lower eulittoral shore. The reason is that Patellas compete for space. There is much more open space on the upper shore due to the lack of plant domination and less population of creatures. However, the lower shore is hugely dominated by large plants, such as fucus serratus and fucus vesiculosus. Due to abiotic factors, the sizes of Patella vary between the two areas. Most Patellas have a larger volume on the lower shore in comparison to the upper shore. The main reason is due to the fact that there is less competition for food, an indispensable factor which is important to all limpets. The less competition comes from the fact that there is a lot of food, i.e. plant, available. More food means more growth. BIOTIC FACTORS. Patella Vulgatas have many concerns mainly because of competition. Their main competitors are themselves. They compete with each other for space and food, however food can be a rare case. ...read more.

NULL HYPOTHESIS. The null hypothesis is that the Patella Vulgata will be distributed evenly in both areas ANTICIPATED METHOD. Before carrying out the investigation, the safety procedures will be considered and obeyed. A random page will be used from a phone directory. This will be used for random coordinates. The method will be to choose a phone number randomly, either by pointing at a number when eyes are shut or by turning the page quickly and spotting the first number the eyes see. When the phone number is randomly chosen, the last two digits will be recorded as the coordinates. The first number will be marched after turning 90 degrees anticlockwise when facing the sea, from a fixed point, and then turning 90 degrees clockwise towards the sea and marching out the second number. The quadrat will be placed down where the co-ordinates stop. As in the past, I have discovered that throwing the quadrat anywhere is not random at all. This gives biased results as the thrower is adjusting the throw how he/she wants. Therefore my method will not only give me accurate results but also very reliable results. This is because of the fact that it was randomly carried out. Once the quadrats have been placed, a random sequence will be used to measure the Patellas. I don't have enough time to measure all the limpets present in the quadrat because my preliminary work corroborates that there can be up to 10-20 limpets in each quadrat, on average. I will need 30 results, 15 from each area. Below is the random sequence I will be using, per quadrat: 1 5 13 8 4 9 21 17 24 12 14 18 25 20 16 10 22 19 23 11 2 6 15 7 3 As you can see each square is numbered. This is the way I will search for the Patella I want to measure. ...read more.

Therefore this has affected the whole of my results but ever so slightly. A tape measure could have been used or instead a string with measurements marked on it. There was also lack of time which prohibited us from obtaining more results. Fewer measurements were taken, having an effect on the averages. The more results accessible, the more evidence there is to prove the conclusion. However I did have an average measurement but I would have preferred to take an average of at least four to five limpets in each quadrat because there were a considerable number of Patellas found. APPARATUS. * Quadrat (x 1) * 30 Centimetres Ruler (in mm) (x 1) * Piece of String (x 1) * Pencil (x 1) * Clipboard (x 1) * Piece of Rock (x 1) * A Page from Phone Directory (x 1) METHOD. The equipment was collected. Random phone numbers were chosen on the directory page. Last two numbers were recorded on a chart for the results. A rock was placed to mark the fixed point. The coordinates were marched out, the first co ordinate being marched by turning 90 degrees anticlockwise when facing the sea, and the second turning 90 degrees clockwise after stopping at the first co ordinate, i.e. now facing towards the sea and marching the second coordinate. Once the destination is reached, the quadrat is placed and the number of Patella are counted and recorded. Then the measurements are taken of the random Patellas chosen. First the circumference is measured, using a string to go around the shell and marking the point where it meets itself. Then straightening the string and placing it on the ruler for the size in millimetres. The ruler is then placed in a crack or slight hole to measure the height. The reason for the ruler being placed in a hole or a crack is that rulers have an extra space before the measurements start. Therefore to start on 0mm, it has to be slightly lower. This experiment is repeated thirty times, fifteen in each area. DIAGRAM. ...read more.