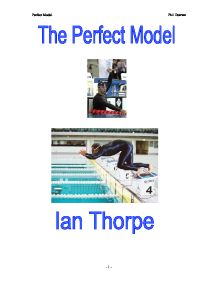 Ian's primary stroke is Freestyle, an event in which he excels, I will now explain the aspects of the skills which are used by Ian and other elite performers to achieve maximum efficiency in the water.

Ian Thorpe was born on 13th October 1982 in Sydney, Australia. He is a full time swimmer and has been recognised as an elite athlete in his field since he was the youngest person ever to be chosen to swim in the Australian team at age 14. He was the fastest 14-year-old swimmer in history, which makes him a good subject for this piece. His achievements to date include gold at the Commonwealth Games where he broke the Commonwealth Record, World Record at the Australian short course championships, Gold at the World Swimming Championships and three gold medals and a world record at the last Commonwealth Games in Manchester. Ian trains 20 hours a week in the pool and three hours a week in the gym. His body fat levels are approx. 7% compared to an average of 15% for his age. Ian's primary stroke is Freestyle, an event in which he excels, I will now explain the aspects of the skills which are used by Ian and other elite performers to achieve maximum efficiency in the water. ...read more.

The leg movement counteracts the excess roll from the pull and balances the body in the water. There are different types of kick, the straight two beat kick, four beat kick and six beat kick. Each style of kick has no effect on the "pattern" of the kick itself but it is important that the feet are plantar-flexed at all times to prevent drag. Timing is very important in kicking, the leg is split into three parts, the upper leg, the lower leg and the foot, it is crucial that the timing of each movement is correct and unless the kick is executed in a "wave" like pattern it can become inefficient. Arm Action- from the "catch" position, the hand flexes slightly and then skulls outwards, backwards, downwards and then inwards, tracing a slightly outwards path finishing down by the costume. The elbow then exits the water first followed by the little finger. The whole pattern is in the form of a shallow "S". ...read more.

When co-ordinating the front crawl stroke the swimmer kicks in multiples, as one hand enters the water and sinks to catch, then that same hand re-enters, the number of kicks during this period are important to the timing of the stroke (as described previously). Efficiency of stroke- With regard to Ian Thorpe, his body position in the water is next to perfect. This is because his arm and leg action is performed with great skill which enables him to be very well balanced in the water. The propulsion gained from his arm and leg action lifts the body high in the water and decreases drag. He demonstrates very good use of plantar-flexion in his feet and wrists, which help to propel his body forward and at the same time helping his body to streamline with minimum drag. His body composition is also perfect for swimming, he is very tall and has huge feet that act like flippers to catch as much water as possible making him one of the fastest and most respected swimmers in the world. ?? ?? ?? ?? Perfect Model Phil Durrant - 1 - ...read more.