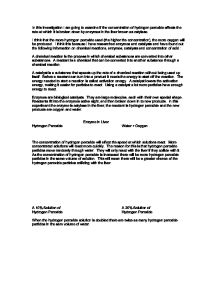 In this investigation I am going to examine if the concentration of hydrogen peroxide affects the rate at which it is broken down by enzymes in the liver known as catylase.

In this investigation I am going to examine if the concentration of hydrogen peroxide affects the rate at which it is broken down by enzymes in the liver known as catylase. I think that the more hydrogen peroxide used (the higher the concentration), the more oxygen will be produced. I think this because I have researched enzymes and catalysts and have found out the following information on chemical reactions, enzymes, catalysts and concentration of acid : A chemical reaction is the process in which chemical substances are converted into other substances. A reactant is a chemical that can be converted into another substance through a chemical reaction. A catalyst is a substance that speeds up the rate of a chemical reaction without being used up itself. Before a reactant can turn into a product it needs the energy to start off the reaction. The energy needed to start a reaction is called activation energy. A catalyst lowers the activation energy, making it easier for particles to react. Using a catalyst a lot more particles have enough energy to react. Enzymes are biological catalysts. They are large molecules, each with their own special shape. Reactants fit into the enzymes active sight, and then broken down in to new products. ...read more.