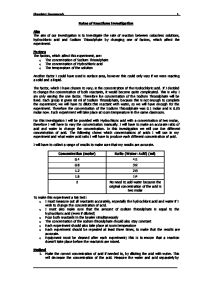 Investigate the rate of reaction between colourless solutions, hydrochloric acid and Sodium Thiosulphate by changing one of factors, which affect the experiment.

Hypothesis My hypothesis for this experiment is that as the concentration of hydrochloric acid increases, so will the rates of reaction. Therefore, the cross will disappear more quickly due to the cloudiness of the solution. The reason I predict this hypothesis is because of two main reasons: o Collision Theory states that a chemical reaction can only occur between particles when they collide. The faster the particles are going, the more energy they have or the more particles there are, the more likely they are to collide. Fast moving particles are more likely to react when they collide. When the concentration of a liquid increases, it means that there are more particles per cubic centimetre and because there are more particles there is a higher chance of collision. o I undertook a preliminary experiment before I began this one. It also investigated rates of reaction, however the reactants of this experiments were Magnesium and Hydrochloric acid. In this experiment I also varied the concentration of the acid and I concluded in that experiment that the higher the concentration of acid the quicker the rate of reaction. Therefore I believe that I will come out with the same conclusion as I did last time. Diagram Equipment (For each single experiment) Equipment Quantity Reason 250 ml Beaker 1 To place the reactants in, therefore the reactions can take place 100 ml Beaker 2 One beaker is to dilute the hydrochloric acid and water and the other is to put the 5 ml of Sodium Thiosulphate in. ...read more.

The method I used for this experiment gave us good results. It was quite simple to follow and was completed quickly. To make the results more accurate, I could have taken more readings and used a more precise measuring instrument to indicate when to stop timing the reaction. When we did it with this experiment we used our own judgements to tell when the cross could no longer be seen, however if we used a more accurate instrument, e.g. a light sensor we would have obtained more accurate readings. Another reason why we should have used a light sensor is because if we repeated the experiment to get similar results it may not be possible because the cross which was drawn on by pencil could be lighter or darker than the original one because different people apply pressure differently when writing. If I did this experiment again, I would definitely take more readings so that I got a wider range of results that would give me a clearer graph and basically a better, more productive experiment. I would also use a light sensor instead of the cross technique as it is more accurate and reliable. If I wanted to investigate further I would re do this experiment again but at different temperatures. Therefore I will vary the concentrations at one temperature and vary the concentrations again at another temperature. From this I could be able to find an optimum temperature and concentration in which the rate of reaction is at it's fastest. 1 Chemistry Coursework ...read more.