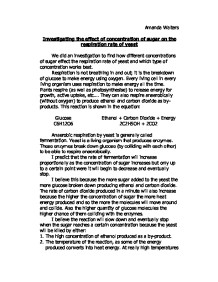 Amanda Walters Investigating the effect of concentration of sugar on the respiration rate of yeast We did an investigation to find how different concentrations of sugar effect the respiration rate of yeast and which type of concentration works best. Respiration is not breathing in and out; it is the breakdown of glucose to make energy using oxygen. Every living cell in every living organism uses respiration to make energy all the time. Plants respire (as well as photosynthesise) to release energy for growth, active uptake, etc.... They can also respire anaerobically (without oxygen) to produce ethanol and carbon dioxide as by-products. This reaction is shown in the equation: Glucose Ethanol + Carbon Dioxide + Energy C6H12O6 2C2H5OH + 2CO2 Anaerobic respiration by yeast is generally called fermentation. Yeast is a living organism that produces enzymes. These enzymes break down glucose (by colliding with each other) to be able to respire anaerobically. I predict that the rate of fermentation will increase proportionally as the concentration of sugar increases but only up to a certain point were it will begin to decrease and eventually stop. ...read more.

� Once the first bubble appears out of the tube and into the water filled beaker, we start the stop clock and count the number of carbon dioxide bubbles appearing. We must wait for the first bubble to appear because the enzymes do not collide straight away with the glucose. We do this for one minute then do the experiment again with a different concentration of sugar. We did a preliminary experiment that helped me choose my method. Instead of finding the respiration rate by the number of bubbles we tried to find the volume of carbon dioxide being produced. We used the same apparatus but instead of leaving the end of the tube in the water beaker we placed it in a water-filled upside down beaker. When the bubbles came out of the tube the cylinder began filling with carbon dioxide. So instead of counting the number of bubbles we had to measure the difference between the starting volume of water and the end volume to see how much carbon dioxide had been used. This experiment resulted being very impractical, as the respiration rate was far too small to be able to detect with the measuring cylinder. ...read more.