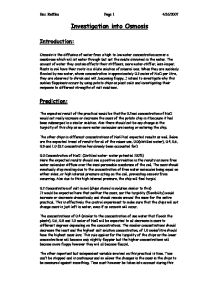 Investigation into Osmosis Introduction: Osmosis is the diffusion of water from a high to low water concentration across a membrane which will let water through but not the solute dissolved in the water. The amount of water they contain affects their stiffness, more water-stiffer, less-limper. Plants in soil have their roots in a dilute solution of mineral ions. When they are suddenly flooded by sea water, whose concentration is approximately 0.3 moles of NaCl per litre, they are observed to shrink and wilt, becoming floppy. I intend to investigate why this sudden floppiness occurs by using potato chips as plant cells and investigating their response to different strengths of salt solutions. Prediction: The expected result of the practical would be that the 0.2mol concentration of NaCl would not really increase or decrease the mass of the potato chip in it because it had been submerged in a similar solution. Also there should not be any change in the turgidity of this chip as no more water molecules are leaving or entering the chip. The other chips in different concentrations of NaCl had expected results as well. Below are the expected trend of results for all of the values use, 0.0(distilled water), 0.4, 0.6, 0.8 and 1.0 (0.2 concentration has already been accounted for) 0.0 Concentration of NaCl: (Distilled water- water potential 100%) Here the expected results should see a positive correlation in the results as more free water molecules diffuse over the semi-permeable membrane of the cell. The mass should eventually stop swelling due to the concentration of free water molecules being equal on either sides, or high internal pressure acting on the cell, preventing osmosis from occurring. Also due to this high internal pressure, the chip will feel turgid. 0.2 Concentration of salt in soil (chips stored in solution similar to this) It would be expected here that neither the mass, nor the turgidity (flexibility) ...read more.

Conclusion: By looking at my graph of average chip mass against time and observations I can see that there is a positive correlation for the distilled water, gaining mass and becoming more turgid as time goes on, starting at 4.5 grams and finishing at 4.65 grams shows an increase of 0.16 grams. That's a 3.3% increase in its starting mass. The 0.2 mol solution of NaCl had a very slight negative correlation. From starting at 4.69g it decreases in mass down to 4.56grams, an overall loss of 2.7% of its original mass. It did not become flaccid although it is slightly less turgid than the chip in distilled water. The chips in the 0.6, 0.8 and 1.0 molar solutions all have a negative correlation, although the 0.8 mol solution results was not quite what was expected. Its mass percentage change is 0.6% above what was expected (About 9.3% decrease). By looking at the average percentage change graph against concentration of NaCl (hand drawn graph) it can be seen that the solution that the chips were bathed in prior to the practical was about a 1.5 molar solution of NaCl. This can be seen where the best fit line crosses the 0.0% change mark, showing that at that concentration the mass of the chip neither raise nor fell. These result fit very closely to what was predicted. Analysis of Results: The 0.0mol Concentration of NaCl: (Distilled water- water potential 100%) Here the results show a positive correlation. This is because more free water molecules diffuse over the semi-permeable membrane of the cell. The chip should eventually stop swelling due to the concentration of free water molecules being equal on both sides and high internal pressure acting on the cell, preventing osmosis from occurring. Also due to this high internal pressure, the chip will feel turgid. There will be a higher concentration of free water molecules outside the cell wall to start with so, due to the laws of probability more will diffuse in to the cell than will diffuse out. ...read more.

Then an average could be found of the entire classes results and conclusions could easily been drawn from that as the wide range of data would remove most odd results thus making conclusions more obvious. Different variables could be tested out to try to find out in what ways other variables, for example chip size or solution temperature could be tested. This would allow more to be found out in the conclusion section form the results and so therefore the prediction may have been easier to prove. Another improvement to the test could be that a very concentrated salt solution could have been used, for example around 5 moles/liter in concentration and carry out the practical with that chip as well, just to see if there is a maximum amount of water loss that a potato chip can experience and to prove that eventually the mass loss will plateau out due to a lack of water molecules on one side of the objects, wither the solution or the chip. This would have helped to see if the chip will continue losing mass or stop water a while as predicted, This was not seen in the gathered results due to time limitations but this one chip could be left overnight or until lunchtime for example. Another chip could be left in the 0.0 (distilled water) concentration to see if the prediction that a chip will not go on increasing its mass but will stop due to a lack of water on the outside of it or an extremely high internal pressure, again this would help prove the prediction as a plateau was not reached in the results collected, not because ether isn't one but because there was a lack of time. Only these two concentrations need to be left as they are the far extremes of the ranges and so will represent all values above and below the original. Ben Raffles Page 1 4/26/2007 ...read more.