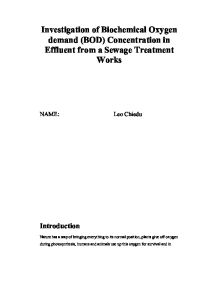 Investigation of Biochemical Oxygen demand (BOD) Concentration in Effluent from a Sewage Treatment Works NAME: Leo Chiedu Introduction Nature has a way of bringing everything to its normal position, plants give off oxygen during photosynthesis, humans and animals use up this oxygen for survival and in turn give off carbon dioxide (CO2), which is used up by plants. This relationship shows how nature has created a balance between plants and animals. In natural water all living organism depend on the oxygen or dissolved oxygen in water for sustainability. Dissolved oxygen (DO) I water helps maintain a healthy river, lake and ocean and thus supporting different kinds of aquatic organism. A symbiotic system exits whereby all aquatic organisms depend on themselves for survival. Most of the dissolved oxygen (DO) in water comes from photosynthesis and atmosphere, about 8 - 10mg/l is needed to maintain 100% saturation in water. However, the level of dissolved oxygen in water varies, the amount or concentration of oxygen (O2) rises from morning through o evening, this is as a result of serious activity by plants in water. At this time photosynthesis is taking place and so oxygen (O2) is given off, whereas at night, the level of oxygen drops because photosynthesis has stopped. Nonetheless, plants and animals continue to consume oxygen. The level of oxygen drops, this drop may bring down the level of to about 4mg/l and this is the minimum amount that is required to sustain the living organisms in water. Man and nature contribute significantly to the level of dissolved oxygen (DO) in water both in a positive and negative way. Nature The levels of dissolved oxygen in water can greatly be affected by weather conditions, these are; temperature, pressure, erosion, sedimentation and ice cover. These factors affect the solubility of oxygen (O2) in water. An increase in temperature reduces the amount of dissolved oxygen. As the temperature increases the saturation concentration decreases (Gray N.F 1999). ...read more.

The value is lower than the set value, the t - sample shows clearly that there is very strong evidence against the null hypothesis. The mean value is less than the set limit of 25mg/l. confidence interval was also obtained and it shows that the mean value is well within the confidence intervals. There is 95% confidence that the sample is less than the set limit. In an experiment errors can affect the degree of confidence of a result, error can occur as a result of the following; o Lack of precision may arise from the many volumetric transfer of solution from one container to another. o Air bubble noticed before the BOD7 test was carried out. o Not being able to determine the actual end point during titration with 0.0125M thiosulphate solution. o Interference from the atmosphere, for instance oxygen from the air. o Error from dilution. All the stated above errors can affect the result obtained, however, the significance or margin of error is quite minimal. From statistic the standard error values are quite small and could not have affected the final values obtained. It also shows that the dilution factor that was used was accurate as regards the level of dissolved oxygen present. An error of 0.1cm3 on a titration of 10cm3 is of 1% but on 100cm3 is reduced to 0.1% (Fifield F.W el al, 1996). Therefore, the larger the volume of sample the lesser the error that may occur within the experiment. Conclusion The biochemical oxygen demand concentration of water sample from a sewage treatment works was carefully monitored, the concentration value did not exceed the set guideline and regulation by the European Union for discharge into river by sewage treatment works (The Urban Waste Water Treatment Directive (91/271/EEC)). From figure (2) there is a marked difference between the primary and secondary values, therefore, it can be inferred that the treatment is efficient and the quality of effluent produced meets the European Union standard. In conclusion the effluent water can be discharged into any receiving water body. ...read more.