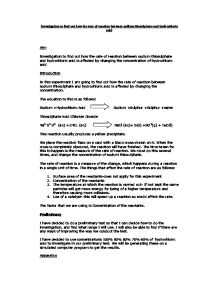 Investigation to find out how the rate of reaction between sodium thiosulphate and hydrochloric acid.

We then recorded the time for the cross to become completely obscured. We repeated this many times, adding different amounts of sodium thiosulphate and water each time, and recording the time taken each time. Diagram Fair test To make this experiment a fair test, we need to make sure we do a number of things. In this experiment we are trying to find the rate of reaction using concentration as a factor, so there is a number of things we need to make sure we do to keep it a fair test. Firstly, we need to keep a chemical at a constant concentration. So, in this experiment we have chose to keep hydrochloric acid at a constant concentration. We could have, however, used sodium thiosulphate as a constant, but we had chose to use hydrochloric acid. Next we must make sure that the solution is kept at a constant volume throughout the experiment. If the volume is different, then it could give different results to if it was at a constant volume. We must also make sure that we add both the water and the sodium thiosulphate at exactly the same time (into the conical flask with the hydrochloric acid in it), or it could effect the results of the experiment. We must start the stop watch at the exact time as we put the water and the sodium thiosulphate into the conical flask. ...read more.

However, there are still a few anomalous results which I will now point out. Hydrochloric Acid Sodium Thiosulphate Water Time Taken (s) 50 10 0 49 45 10 5 45 40 10 10 51 35 10 15 69 This is the only anomalous result that I have recorded. The result may have turned out anomalous because of basic human error, or maybe because we measured the substances wrong. It may have even been because we did not clean the apparatus properly. Apart from this, the accuracy of my experiment has been more or less accurate. Although there are a number of ways in which we could have made the results more reliable. For instance, we could have used better measuring equipment, because the apparatus we used was mainly basic equipment. Another thing we could have done to bring more evidence is to have tried to use the hydrochloric acid as the variable substance, and used the sodium thiosulphate as the constant substance. This would have brought more evidence to support the idea that the higher concentration of a substance, the faster it will react. I think that the evidence, which I have received, is enough to reach a suitable conclusion, but there are a few flaws to the experiment (which I have mentioned). Apart from them, the experiment is fine. ...read more.