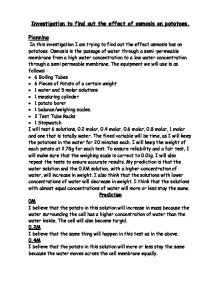 Investigation to find out the effect of osmosis on potatoes.

Investigation to find out the effect of osmosis on potatoes. Planning In this investigation I am trying to find out the effect osmosis has on potatoes. Osmosis is the passage of water through a semi-permeable membrane from a high water concentration to a low water concentration through a semi permeable membrane. The equipment we will use is as follows: - * 6 Boiling Tubes * 6 Pieces of Potato of a certain weight * 1 water and 5 molar solutions * 1 measuring cylinder * 1 potato borer * 1 balance/weighing scales. * 2 Test Tube Racks * 1 Stopwatch I will test 6 solutions, 0.2 molar, 0.4 molar, 0.6 molar, 0.8 molar, 1 molar and one that is totally water. The fixed variable will be time, as I will keep the potatoes in the water for 20 minutes each. I will keep the weight of each potato at 2.78g for each test. To ensure reliability and a fair test, I will make sure that the weighing scale is correct to 0.01g. ...read more.

Evaluation I believe that my results are quite reliable because we did repeat the tests three times after we had done the initial test. I found out that nearly half of my results turned out as I predicted, although many did not. My results were very consistent though, excluding the final set, so my prediction may have been wrong. The likely outcome is that the experiment went wrong. Perhaps the weight or length was very marginally different for those particular potatoes as the weighing scales could have had a problem, the water level might not have been quite the same, or the dilutions may have been slightly wrong. If we were to do the experiment again, I would try very hard to ensure that these problems would not happen again. As I said before, the 0M, 0.8M and 1M solutions supported my prediction, but 0.2M, 0.4M and 0.6M did not. To carry out further research, I could do the same experiment but with different foods or plants to see if that made any difference or I could put a raw egg into a small jar, fill it with vinegar and then see what effect it has on egg shells. ...read more.