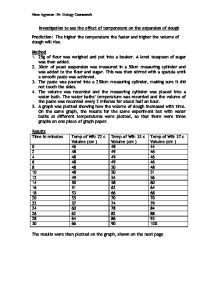 Investigation to see the effect of temperature on the expansion of dough.

Investigation to see the effect of temperature on the expansion of dough Prediction: The higher the temperature the faster and higher the volume of dough will rise. Method 1. 25g of flour was weighed and put into a beaker. A level teaspoon of sugar was then added. 2. 30cm of yeast suspension was measured in a 50cm measuring cylinder and was added to the flour and sugar. This was then stirred with a spatula until a smooth paste was achieved. 3. The paste was poured into a 250cm measuring cylinder, making sure it did not touch the sides. 4. The volume was recorded and the measuring cylinder was placed into a water bath. The water baths' temperature was recorded and the volume of the paste was recorded every 2 minutes for about half an hour. 5. A graph was plotted showing how the volume of dough increased with time. On the same graph, the results for the same experiment but with water baths at different temperatures were plotted, so that there were three graphs on one piece of graph paper. Results Time in minutes Temp of WB: 22 c Volume (cm ) Temp of WB: 33 c Volume (cm ) Temp of WB: 37 c Volume (cm ) 0 46 48 44 2 48 49 46 4 48 49 46 6 48 49 46 8 48 50 48 10 48 50 51 12 49 54 56 14 ...read more.

This is when the yeast cells break down sugar in the absence of oxygen they produce ethanol and carbon dioxide. This reaction is summed up as follows: Glucose --> Carbon Dioxide + Ethanol + Energy Aerobic respiration is necessary because it provides more energy than anaerobic. It is needed so that the yeast cells can grow and reproduce. However, when the yeast cells have reached a sufficient number they can survive for a considerable amount of time in low oxygen conditions, such as the oven, and will break down the available sugar to produce ethanol. Fermentation is the anaerobic respiration of yeast. After the concentration of ethanol has reached 12%, the yeast cells are killed and fermentation stops. Increasing the temperature speeds up the reaction. The molecules gain more energy and move faster and travel at greater distances, which results in more collisions. This refers to the collision theory that in order for a reaction to take place there must be substances to collide. For collision to take place the particles must collide fast enough but in the right direction. Therefore, the higher the number of collisions means the faster the rate of reaction. So by increasing the temperature will therefore increase the number of collisions. This explains how the yeast has risen in the experiment. The temperature allows the yeast cells to collide. ...read more.

To further the investigation, some factors could be changed to see the effect on how dough rises but not only with temperature. * Add more yeast suspension but keep the others the same. This is because then the dough will rise quicker, as the enzyme in yeast known as zymase would be more, available for a faster reaction. * More sugar could be added. This would also increase the rate at which the collisions take place, and the reactions, causing the dough to rise quickly. * The quantity of flour. If there is more flour than yeast then the reaction slows down, so the flour has to preferably be in proportion to the yeast. * Temperatures cannot be too high, otherwise the enzymes will die, and they cannot be too low otherwise they would react more slowly. * The pH level was not considered for this experiment, but in a future experiment the pH level is best at pH6. This is recommended level for the yeast enzymes to grow, and by keeping the level at six, the rate of reaction would increase. * The oxygen that the yeast can reach could be increased and would mean a faster reaction. All these factors could be changed but not at the same time to make it a fair test. This would lead to more collisions and an increase in rate of reaction, exploring other factors that may cause dough to expand. Nana Agyeman 10v. Biology Coursework ...read more.