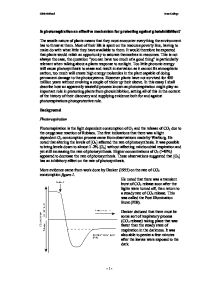 Is photorespiration an effective mechanism for protecting against photoinhibition?

Is photorespiration an effective mechanism for protecting against photoinhibition? The sessile nature of plants means that they must encounter everything the environment has to throw at them. Most of their life is spent on the resource poverty line, having to make do with what little they have available to them. It would therefore be expected that plants would relish an opportunity to saturate themselves in resources. This is not always the case, the quotation "you can have too much of a good thing" is particularly relevant when talking about a plants response to sunlight. Too little photonic energy will cause photosynthesis to cease and result in starvation as it cannot fix atmospheric carbon, too much will create high energy molecules in the plant capable of doing permanent damage to the photosystems. However plants have not survived for 400 million years without evolving a couple of tricks up their sleeve. In this essay I shall describe how an apparently wasteful process known as photorespiration might play an important role in protecting plants from photoinhibition, setting all of this in the context of the history of their discovery and supplying evidence both for and against photorespirations photoprotective role. Background Photorespiration Photorespiration is the light dependent consumption of O2 and the release of CO2 due to the oxygenase reaction of Rubisco. The first indications that there was a light dependent O2 consumption process came from observations made by Warburg. He noted that altering the levels of [O2] affected the rate of photosynthesis. It was possible to bring levels down to almost 1-2% [O2] without affecting mitchondrial respiration and yet still increasing the rate of photosynthesis. Higher concentrations of O2 (>40%) appeared to decrease the rate of photosynthesis. These observations suggested that [O2] has an inhibitory effect on the rate of photosynthesis. More evidence came from work done by Decker (1955) on the rate of CO2 consumption figure 1. ...read more.

Plants avoid photoinhibition in two ways; by either lowering their ability to absorb light, reducing the efficiency of their photosystems, or they find ways of dissipating the energy absorbed by the photosystem through non-assimilatory electron transport. Reducing photon absorption Reducing the efficiency of light capture can be achieved on a developmental, cellular and biochemical level in plants. Developmentally differences in the leaf anatomy of sun and shade leaves goes further than simply altering the thickness and the available leaf area but also resource partitioning is tuned to increasing light capture in shade leaves and increasing Calvin cycle components in sun leaves. There are also examples of negative heliotropism, plants bending away from bright light in order to protect themselves. Within the photosynthetic cells themselves orientation of the chloroplasts largest side away from the light reduces the efficiency of light capture. However these methods may not be sufficient and so plants also use biochemical pathways to reduce efficiency, mainly by converting the excess light energy to heat before it can excite an electron. Chlorophyll can be de-excited in order to increase the intensity of light at which photosynthesis begins to plateau off. Certain photoprotective chemicals can be produced through the phenylpropanoid pathway which aid in absorbing harmful light radiation (whether this is only for non visible light i.e. UV protectants I am not sure). The increase in intrathylakoidal space [H+] as a side effect of increased photosynthetic activity results in the interconversion, via epoxidation, of high efficiency pigments (Violaxanthin) to lower efficiency ones (Zeaxanthin). The opposite also occurs and evidence for this process is a correlation between the ratio of pigments and the energy dissipation of the system. During long-term exposure to high light intensities the most drastic method of reducing photosystem efficiency is the sacrificial protection PSII undergoes in order to protect PSI from photoinhibition. PSII contains a metabolically in expensive polypeptide D1, which, much like the crumple zone of a car, is designed to become photochemically damaged the expense of the safety of the other components of the photosystems (as PSII lies before PSI). ...read more.

into heat energy, all the elements are returned to their native states, hence the term "Water Water" cycle. ? 2H2O + O2* --> O2 + 2H2O The Asada cycle also creates a proton gradient which can be used to create ATP which is not consumed in the cycle itself. The creation of the proton gradient also serves to convert high efficiency pigments into lower efficiency ones as previously mentioned. The major difference between the two non-assimilatory electron transport pathways is that whilst photorespiration uses ATP and NADPH the Asada pathway generates ATP. Both have suspected secondary roles in promoting photoprotection and I believe that a mix of the two is required for effective protection against photoinhibition. The subtle differences described above contributing to this, if there is an excess of ATP and NADPH then photorespiration can be used to lower their levels whereas if there is too much light and active oxygen species are being produced then the Asada pathway will come into play. It is not possible for one to exist without the other and that this mix is dependant on the environment. Heber et al (1996) found that in Chenopdium bonus photorespiration is essential for maintaining electron flow in high light whilst the Asada pathway was insufficient to prevent photoinhibition. (I do not know if they showed the photorespiration was sufficient in this species). Discussion Photorespiration is apparently here to stay. What is the exact origin for the oxygenase activity of Rubisco, are they here today because of their role in photoprotection or usefulness in providing intermediates for the Calvin cycle or is it here merely as an evolutionary hijacker to the selective advantage conferred by the carboxylase activity and plants have merely made the best of a bad situation. I believe it is a mixture of the two although I am sure that in time the answers will reveal themselves. As for photorespirations role in protecting against photoinhibition there is enough evidence to establish in some plants that it is used however undoing the tangled knot of photoprotection control may take a long time. ...read more.