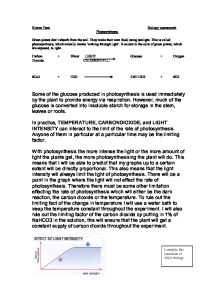 Photosynthesis. In practice, TEMPERATURE, CARBONDIOXIDE, and LIGHT INTENSITY can interact to the limit of the rate of photosynthesis

Kieron Fenn Biology coursework Photosynthesis. Green plants don't absorb from the soil. They make their own food, using sunlight. This is called photosynthesis, which actually means 'making through light'. It occurs in the cells of green plants, which are exposed, to light. Carbon + Water LIGHT Glucose + Oxygen Dioxide CHLOROPHYLL 6Co2 + H2O C6H12O2 + 6O2 Some of the glucose produced in photosynthesis is used immediately by the plant to provide energy via respiration. However, much of the glucose is converted into insoluble starch for storage in the stem, leaves or roots. In practice, TEMPERATURE, CARBONDIOXIDE, and LIGHT INTENSITY can interact to the limit of the rate of photosynthesis. Anyone of them in particular at a particular time may be the limiting factor. With photosynthesis the more intense the light or the more amount of light the plants get, the more photosynthesising the plant will do. This means that I will be able to predict that my graphs up to a certain extent will be directly proportional. This also means that the light intensity will always limit the light of photosynthesis. There will be a point in the graph where the light will not effect the rate of photosynthesis. Therefore there must be some other limitation effecting the rate of photosynthesis which will either be the dark reaction, the carbon dioxide or the temperature. ...read more.

Method Fill the boiling tube with water and add 1g to the sodium hydrogen carbonate. Then place the Canadian pond weed using the tweezers. Then place the boiling tube in the water bath and take the temperature. Then place the water bath in front of the light source and wait for the bubbling to star. If there is no bubbling then you must snip a piece off the top of the weed. Place the light source at your chosen distances and count the bubbles for 1 minute each time. The conditions that we had to use were the room had to be dark and the temperature of the solution was 19 degrees Celsius. Diagram Analysis The graphs I have laid out are concave curves, which is what you would have to expect from graphs with direct proportion. The plots show and the lines show the results, on the distance/bubbles graph, you will be able to see that I have plotted an average as well as the previous three attempts. On the second graph you can see that I did no plot and show the previous three attempts because I felt that it was not necessary. The curves on both of the graph show that the rate of photosynthesis never reached zero as I predicted in the hypothesis, this is because the room never was totally dark. ...read more.

Although I think that the reliability of the experiment was not as good as it could be, I think that the experiment was not really that effected, and it wasn't that much of a problem. To make my results reliable and good I decided to do them three times and then take an average to produce the graph and from the graph I would say that my results were suitable and very reliable. My results produced similar graphs to what I had hypothesised in my hypothesis. I feel that the distance graph was inversely proportional like I said in my theory and the intensity graph was directly proportional. I did not get very accurate answers because some of the bubbles were bigger than the others. To make more accurate results I would use a more accurate method as shown below. As you can see the bubbles produced by the plant is automatically drawn up the capillary tube and then they congregated at the corner. After one minute I will pull back the syringe and this will draw one big bubble to the end of the syringe. Then I will be able to measure the bubble with a ruler. After knowing this information and the circumference of the capillary tube you can then work out the surface are therefore giving a more accurate result. By Kieron Fenn. ...read more.