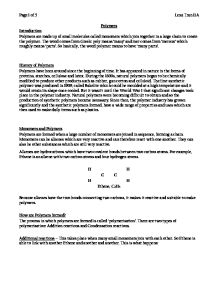 Polymers Introduction Polymers are made up of small molecules called monomers which join together in a large chain to create the polymer. The word comes from Greek: poly means 'many' and mer comes from 'merous' which roughly means 'parts'. So basically, the word polymer means to have 'many parts'. History of Polymers Polymers have been around since the beginning of time. It has appeared in nature in the forms of proteins, starches, cellulose and latex. During the 1800s, natural polymers began to be chemically modified to produce other products such as rubber, gun cotton and celluloid. The first synthetic polymer was produced in 1909; called Bakelite which could be moulded at a high temperature and it would retain its shape once cooled. But it wasn't until the World War I that significant changes took place in the polymer industry. Natural polymers were becoming difficult to obtain and so the production of synthetic polymers became necessary. Since then, the polymer industry has grown significantly and the synthetic polymers formed, have a wide range of properties and uses which are then used to make daily items such as plastics. Monomers and Polymers Polymers are formed when a large number of monomers are joined in sequence, forming a chain. Monomers can be alkenes which are very reactive and can therefore react with one another. ...read more.

Since there are no double bonds in the polymer, it is now an Alkane. The addition polymerisation is also known as the chain-growth polymerisation. Addition reactions have these particular features: * Molecular species can react only with active centres. * Chains are long at all times. * Some monomers remain until the end of the reaction. * Reactions are relatively fast, generating lots of heat. Condensation reactions - When this occurs, there is always another end product other than the polymer. The reactive groups in condensation polymerisation are at the end of each monomer, which then connects to another end of an extra monomer. A and B are monomers. The extra part in the end product is seen with the overlaps in the shape of A and B. With a growing chain, it has a reactive group on the ends, which means it can be joined with another long chain and makes it suddenly get larger. Two types of different reactive groups are required for condensation polymerisation. Reactions can be done with one monomer with two kinds of reactive group (A-B) or two different monomers (A-A and B-B) The key features of condensation polymerisation are: * Any two molecular types can react. * Chains start short and steadily grow * Most monomers are gone early in the reaction * Reactions are relatively slow and generate little heat This table shows the differences in Addition and Condensation reaction in time. ...read more.

It is less efficient and more costly than recycling other materials such as metals, but it is better than living among piles of polymers which cannot decay. Currently, only 3.5% of all plastics made are recycled compared to 34% of paper, 22% of glass and 30% of metals. Paper, class and metal are easy to recycle more than once and can be reused, but plastics are more complicated. Solutions: To recycle polymers, it firstly needs to be separated into groups, depending on what polymer it was made from. Some polymers are then melted, depending on whether or not they have a lot of synthetics in them - the ones with the least synthetics are able to be recycled. The polymers cross-linked with synthetics are difficult to stretch and less flexible. The melted polymers can then be moulded into a new product. There are two areas polymers can be categorised into: polyethelyne, which are High Density Polyethene (HDPE) and Low Density Polyethene (LDPE). The polymers are sorted into codes which help consumers separate their plastics before disposing of them. This is High Density Polyethene (HDPE) This is Low Density Polyethene (LDPE) Conclusion From this study, I have learnt the differences between Addition and Condensation reactions in polymerisation. I understand the importance of polymers in daily life and know how it is recycled and the problems to do with it. Page 1 of 4 Lena Tran 11A ...read more.