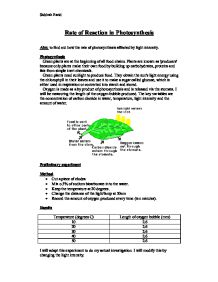 Rate of Reaction in Photosynthesis

Rate of Reaction in Photosynthesis Aim: to find out how the rate of photosynthesis affected by light intensity. Photosynthesis Green plants are at the beginning of all food chains. Plants are known as 'producers' because only plants make their own food by building up carbohydrates, proteins and fats from simple inert chemicals. Green plants need sunlight to produce food. They obtain the sun's light energy using the chlorophyll in their leaves and use it to make a sugar called glucose, which is either used in respiration or converted into starch and stored. Oxygen is made as a by product of photosynthesis and is released via the stomata. ...read more.

When a certain light intensity is reached the rate of photosynthesis is constant. It can't go any faster even if the light intensity continues to rise. I know from my own knowledge that this can be the effect of limiting factors such as Sodium Bicarbonate in this case. The reason the rate of photosynthesis will stabilize after a certain point would be lack of other factors such as carbon dioxide. These are known as limiting factors. Method * Cut a piece of elodea, mix o.5% of sodium bicarbonate into the water. * Keep the lamp at 20 degrees. * Change the distance of the light by moving the lamp back 10cm every ten minutes. ...read more.

The reason why it stabilises is because that even though there is an increase in the light intensity there will be no increase in the other factors e.g. carbon dioxide and the temperature. These are limiting factors and the plant needs constant supply of all these factors to continue to photosynthesise. On my graph there happens to be one anomalous result, this could be due to a reading error. For a plant to photosynthesise continuously three factors are required which are temperature, carbon dioxide and light. If I had an equal amount of all three variables then the graph would have shown a constant rise in the rate of photosynthesis however, this wasn't the case and due to lack of the other two factors i.e. temperature and carbon dioxide the rate of photosynthesis stabilized after a certain point. ?? ?? ?? ?? Siddrah Farid ...read more.