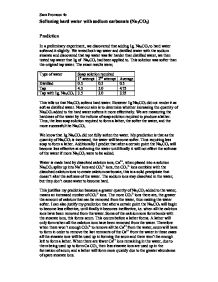 Softening hard water with sodium carbonate (Na2CO3) Prediction In a preliminary experiment, we discovered that adding 1g. Na2CO3 to hard water softened it slightly. We tested both tap water and distilled water with the sodium stearate and discovered that tap water was far harder than distilled water, we then tested tap water that 1g of Na2CO3 had been applied to. This solution was softer than the original tap water. The exact results were; Type of water Soap solution required 1st attempt 2nd attempt Average Distilled 0.5 0.5 0.5 Tap 4.5 5.0 4.75 Tap with 1g. Na2CO3 3.5 3.0 3.25 This tells us that Na2CO3 softens hard water. However 1g Na2CO3 did not render it as soft as distilled water. Now our aim is to determine whether increasing the quantity of Na2CO3 added to the hard water softens it more effectively. We are measuring the hardness of the water by the volume of soap solution required to produce a lather. Thus, the less soap solution required to form a lather, the softer the water, and the more successful the Na2CO3. We know that 1g Na2CO3 did not fully soften the water. ...read more.

NB. Ensure that temperature does not vary too much while the experiment is being conducted Quantity of Sodium Carbonate (g) Quantity of Sodium Stearate required (cm3) 1st attempt 2nd attempt Average 0.75 2 2.5 2.25 1.5 1.9 2 1.95 2.25 1.4 1.6 1.5 3 1.1 1.2 1.15 3.75 0.9 0.8 0.85 Results Analysis From the preliminary work (see above) we knew that 1g Na2CO3 did not fully soften the water. My prediction was that as the quantity of Na2CO3 is increased, the water would become softer. Thus requiring less soap to form a lather. This was accurate as you can see in the table above detailing the results, the quantity of soap required to form a lather decreased by approximately 0.4cm3 for each additional 0.75g of Na2CO3 that was added to the water. Additionally I predicted that after a certain point the Na2CO3 would become less effective at softening the water until finally it will not effect the softness of the water if more Na2CO3 were to be added. That effect is just starting to be visible towards the end of the results. This can be seen more clearly in my graph of results. ...read more.