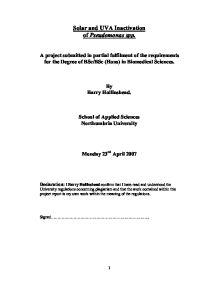 Solar and UVA Inactivation of Pseudomonas spp. A project submitted in partial fulfilment of the requirements for the Degree of BSc/BSc (Hons) in Biomedical Sciences. By Barry Hollinshead. School of Applied Sciences Northumbria University Monday 23rd April 2007 Declaration: I Barry Hollinshead confirm that I have read and understood the University regulations concerning plagiarism and that the work contained within this project report is my own work within the meaning of the regulations. Signed.......................................................................... Introduction. In developing countries drinking water is very scarce due to a lack of funding for water treatment system development. In most eastern developing countries their main source of drinking water comes from surface waters such as rivers and lakes. This causes a major health problem as these rivers and lakes are not only used for drinking but other activities such as defecating near the water source, bathing and watering livestock. It is due to the multiple uses of the water source that results in the water becoming contaminated with pathogenic organisms with over one billion people being exposed to contaminated and unsafe water annually (Rojko, 2003). Due to the problem of these countries being unable to afford expensive water treatment and purification facilities has led to studies in to alternative and inexpensive methods of disinfecting and purification of water for safe drinking. The oldest recorded purification method is the use of sunlight (Reed, 2004) which dates back to 2000 BC. It was not until 1887 when Downes and Blunt as reported by Reed (2004), who carried out the first scientific studies, in to the investigations of effectiveness of the disinfection and purification of solar radiation on bacterial organisms. ...read more.

In a study to investigate this (Mani et al, 2006) bottles with painted black undersides and a custom made reflective backing were compared against a normal clear bottle. By carrying out a series of 22 experiments the bottles were compared under different conditions of sunlight throughout the annual cycle. When comparing the results they showed that the reflective backed bottles showed to be more effective than clear bottles and produced lower counts in either anaerobic or aerobic conditions (Mani et al, 2006). Initially the black painted bottle was at first showing similar results as the clear bottle then after two hours a rapid decrease in numbers was seen. It was also noted that the temperature of the water in the black painted bottle had raised 5oC higher than the other bottles. In changes of sunlight from strong to weak the study showed that in strong sunlight the black painted bottle was much more effective than the other bottles which was suggested to be down to rise in temperature and in low sunlight the reflective bottles were the most effective (Mani et al, 2006). This study demonstrated irrespective of the strength of the sunlight reflective rear surfaces increases the effects of solar disinfection. In warm climates with strong sunlight the black painted bottles speed up the disinfection due to the temperature increase (Moulton, 2006). As well as using bottles a pouch has been developed using food grade packaging materials (Walker et al, 2004) which has shown also to be an effective system which is very inexpensive for use in application of solar disinfection. ...read more.