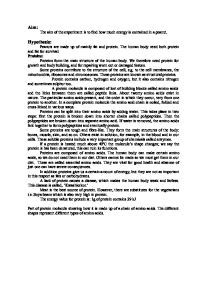 The aim of the experiment is to find how much energy is contained in a peanut.

Aim: The aim of the experiment is to find how much energy is contained in a peanut. Hypothesis: Peanuts are made up of mainly fat and protein. The human body need both protein and fat for survival. Proteins: Proteins form the main structure of the human body. We therefore need protein for growth and body building, and for repairing worn out or damaged tissues. Some proteins contribute to the structure of the cell, e.g. to the cell membranes, the mitochondria, ribosomes and chromosomes. These proteins are known as structural proteins. Protein contains carbon, hydrogen and oxygen, but it also contains nitrogen and sometimes sulphur too. A protein molecule is composed of lost of building blocks called amino acids and the links between them are called peptide links. About twenty amino acids exist in nature. The particular amino acids present, and the order in which they occur, very from one protein to another. In a complete protein molecule the amino acid chain is coiled, folded and cross-linked in various ways. Proteins can be split into their amino acids by adding water. This takes place in two steps: first the protein is broken down into shorter chains called polypeptides. Then the polypeptides are broken down into separate amino acid. ...read more.

I predict this because the peanuts with the higher mass have more chemical bonds thus, more energy will be contained within the bonds. The energy will be given off as the peanut is being burned. I predict that mass is directly proportional to energy released. Method: Apparatus: Bunsen burner, Wood Splints, Stand and Clamp, Boiling Tubes, Mounted Needles, Thermometer, Measuring Cylinder Randomly picked peanuts, Weighing balance. 1. Put 20 cm� of water into a boiling tube. Fix the tube in a clamp so that it is held at an angle of 45�. 2. Weigh a peanut very carefully, in grams using the chemical balance and record the result. 3. Fix the peanut onto a mounted needle, taking care that no bits drop off. 4. Measure the temperature of the water in the boiling tube and note the result. 5. Ignite the peanut in a Bunsen flame. Quickly place the burning peanut under the boiling tube. The idea is to use as much heat as possible from the burning nut to heat the water in the tube. If the nut goes out, relight it quickly and put it back under the tube, When the peanut has completely burnt. Measure the temperature of water in the boiling tube. ...read more.

A lot of the heat was being lost to the surroundings and thus did not heat up the boiling tube with all the water. One fact is that the person doing the experiment should be very attentive because his hand when holding the mounted needle that he jerks around and more heat can be lost. There should be a covering of some sort over the boiling tube and the mounted needle to prevent any heat loss. Aluminium foil would be ideal as heat is reflected back because of its shiny surface. Also a direct supply of oxygen should be provided so that the flame on the peanut is kept going. The peanut took a while to ignite and when you thought you had it lit it would go straight out again. You would have to relight the peanut several times so it can continue burning. The whole peanut would never completely burn as the flame would go out and it will be hard to ignite the peanut again. This will tell you that not all the bonds in the peanut were broken and the experiment is not complete as not all the energy is being released. To improve the experiment maybe a I could have used a more precise thermometer to measure the temperature more accurately, instead of rounding off to the nearest temperature. The water should have been measured more accurately maybe by using a graduated pipette. ...read more.