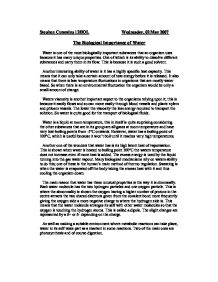 Stephen Cummins 12HOL Wednesday, 02 May 2007 The Biological Importance of Water Water is one of the most biologically important substances that an organism uses because it has many unique properties. One of which is its ability to dissolve different substances and carry them in its flow. This is because it is such a good solvent. Another interesting ability of water is it has a highly specific heat capacity. This means that it can only take a certain amount of heat energy before it is released. It also means that there is less temperature fluctuations in organisms that are mostly water based. ...read more.

So water is quite good for the transport of biological fluids. Water is a liquid at room temperature, this in itself is quite surprising considering the other substances that are in its group are all gases at room temperature and have very low boiling points from -5�C onwards. However, water has a boiling point of 100�C, which is useful because it won't boil until it reaches very high temperatures. Another one of the wonders that water has is its high latent heat of vaporisation. This is shown when water is heated to boiling point 100�C the waters temperature does not increase even if more heat is added. ...read more.

This is where the abnormality is shown the oxygen having a higher number of protons in the centre attracts the two shared electrons given from the covalent bond more frequently giving the oxygen side a more negative charge to where the hydrogen side is. This means that the water molecule arranges its self with other water molecules so that the oxygen is touching the hydrogen atoms. This is called a dipole. The slight charges are represented by a ?+ or ?- depending on the charge. As well as making a suitable environment where metabolic reactions can take place, water in its self takes part as a reactant in some reactions. Two of the main ones are photosynthesis and of course digestion. ...read more.