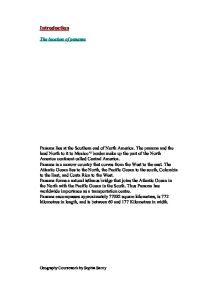 The location of panama

Introduction The location of panama Panama lies at the Southern end of North America. The panama and the land North to it to Mexico'� border make up the part of the North America continent called Central America. Panama is a narrow country that curves from the West to the east. The Atlantic Ocean lies to the North, the Pacific Ocean to the south, Colombia to the East, and Costa Rica to the West. Panama forms a natural isthmus bridge that joins the Atlantic Ocean in the North with the Pacific Ocean in the South. Thus Panama has worldwide importance as a transportation centre. Panama encompasses approximately 77082 square kilometres, is 772 kilometres in length, and is between 60 and 177 Kilometres in width. Climate of Panama Panama has a tropical temperature around 80-90 degrees Fahrenheit (about 25-30 degrees Celsius). The climate is less tropical at higher elevations. In mountain areas the average annual temperature ranges from 50-66f (10-19c). There are two seasons: the dry season with a bright sun from December to April and rainy season from October to November. Humidity is always high at about 80 percent. Why was the canal built? ...read more.

They also include jobs in shops and other businesses that exist because of the economic activity generated by the canal. Panama canal cruises have become one of the most popular ways to visit the Panama Canal. Millions of visitors who come to the Panama Canal cruises generate quiet a lot of money. Rapid urbanisation affecting the city of panama Since the 1950'� Panama has been in the midst if massive urban expansion. Urban population continued to increase 2.5 percent per year. Most of the urban expansion was concentrated in slum tenements and, since 1950, in squatter settlements around the major cities. In 1958 there were 11 identifiable slum or squatter settlements housing 18,000 people in the Panama City. There are now more than 34 slum communities and their population has increased more than five-fold. Most people live below the poverty line. They lack access to adequate sanitation services and electricity. Slum dwellers live in collapsed building, in those sections of the building that remained standing. Some of them settle on the outskirts of the city. A substantial portion of the squatters settled on government land, and there were a numerous programs to permit them to purchase their housing sites. ...read more.

The dam at Gatun Lake generates the electricity to run all the motors, which operate the canal as well as the locomotives in charge o towing the ships through the Canal. The water level between the locks is adjusted be gravity with no use of external force. The rainfall of the area compensates for the loss of the 52 million gallons of fresh water consumed during each crossing. However the activities and development within the watershed area have not been sustainable. The forest has been over-exploited by the farmers, settlers and logging companies. The farmers practice subsistance farming clearing land for thousands of small farms and for cattle ranching. Clearing forests affects the weather and the Panama Canal, which rely on water that has already been through the forest water cycle. Therefore the Government needs to take serious measures to preserve the forest within the watershed area. It is very important for the Government to try to work together with people to solve their problems providing an alternative choice so that they would not practice illegal logging or forest clearance. This will save the future of the Panama Canal, the rich biodiversity and the drinking water for the sake of Panamanians. ?? ?? ?? ?? Geography Coursework by Sophia Sanny ...read more.