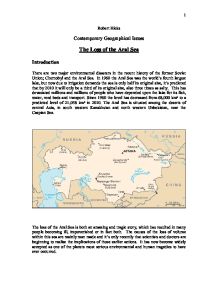 The Loss of the Aral Sea

Robert Hicks Contemporary Geographical Issues The Loss of the Aral Sea Introduction There are two major environmental disasters in the recent history of the former Soviet Union; Chernobyl and the Aral Sea. In 1960 the Aral Sea was the world's fourth largest lake, but now due to irrigation demands the sea is only half its original size, it's predicted that by 2010 it will only be a third of its original size, also three times as salty. This has devastated millions and millions of people who have depended upon the lake for its fish, water, reed beds and transport. Since 1960 the level has decreased from 68,000 km� to a predicted level of 21,058 km� in 2010. The Aral Sea is situated among the deserts of central Asia, in south western Kazakhstan and north western Uzbekistan, near the Caspian Sea. The loss of the Aral Sea is both an amazing and tragic story, which has resulted in many people becoming ill, impoverished or in fact both. The causes of the loss of volume within this sea are mainly man made and it's only recently that scientists and doctors are beginning to realise the implications of those earlier actions. It has now become widely accepted as one of the planets most serious environmental and human tragedies to have ever occurred. This doesn't just have implications upon the sea and its surrounding land. The knock on effect of this over the last forty years has seen the people of this region contract various diseases, such ...read more.

Because of the high levels of salt, not just on the land but also in the atmosphere, the plant growth is being stunted and in some cases they are actually dying. This becomes counter productive and at the same time uses double the amount of water to yield the same crop. The blowing salt, dust and chemical particles or residues are very much linked to the decline of health within the region. The above mentioned diseases and illnesses are proven to have risen drastically over the last forty years; some of them are now said to be at epidemic proportions. Other illness or infections such as typhoid and dysentery are directly related the poor irrigation systems that are in place. These are what we know as third world medical, health and hygiene conditions. These are mainly due to consumption of poor quality drinking water, which is taken directly from the two rivers whose flow in the lower reaches, is largely comprised of irrigation drainage with little or no treatment. These infections have also grown because of the poor medical care, high fertility, poor diet and lack of sewerage systems within the region. The mortality and morbidity and infant mortality and morbidity are the highest in the region consisting of the former USSR. In some localities the infant mortality rate is in excess of 100/1000 births, ten times the rate in the United States. In Muynak, a town to the south which has been isolated from the sea, there is growing concern that the whole town could be wiped out within a generation because of the growing illnesses. ...read more.

Although my conclusions are of course all in hindsight, it must be become of international importance that anything of this magnitude isn't allowed to happen again. I'm sure that in today's climate and with the world's more highlighted approach to geographic and economic problems, it in fact won't occur again. The priority has to be the people's health; the damage to the sea has already been done and seems to be beyond saving. So the health issues are of paramount importance, in order to being able to achieve a stable region - the salt, soil, clean water, use of less hazardous chemicals, should be addressed first. Once these problems have been addressed and in time the generation's health is seen to be improving, the issues of the water levels and irrigation should then be addressed. Much funding is going to be needed; it's no good stopping the growing of cotton under it's current system, because cotton is the biggest export earner, without it or any funding it would probably make the situation worse and it would definitely leave stomachs empty. Once again it appears to be a vicious circle that is going to take much time and much money to even touch the surface. It almost leaves the officials and inhabitants of the area with no choice but to carry on as they are, and that is basically exactly what is happening. The sea is still shrinking, the cotton fields are still busy and the hospitals are still struggling to cope. ...read more.