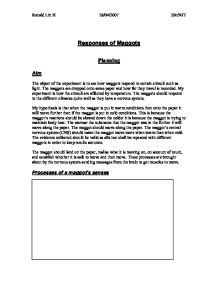 The object of the experiment is to see how maggots respond to certain stimuli such as light.

Responses of Maggots Planning Aim The object of the experiment is to see how maggots respond to certain stimuli such as light. The maggots are dropped onto some paper and how far they travel is recorded. My experiment is how the stimuli are affected by temperature. The maggots should respond to the different climates quite well as they have a nervous system. My hypothesis is that when the maggot is put in warm conditions then onto the paper it will move further than if the maggot is put in cold conditions. This is because the maggot's reactions should be slowed down the colder it is because the maggot is trying to maintain body heat. The warmer the substance that the maggot was in the further it will move along the paper. The maggot should move along the paper. The maggot's central nervous system (CNS) should make the maggot move more when warm than when cold. The evidence collected should be valid as alls test shall be repeated with different maggots in order to keep results accurate. The maggot should land on the paper, realise what it is moving on, on account of touch, and establish whether it is safe to move and then move. ...read more.

After it had been placed at 40�C the maggot ran around very quickly and moved quite far, almost off the paper. The measurement as the crow flies was 25 cm. Also when put in at 50C the maggot died as the heat was too much for it. Therefore in the proper experiment the maggots should not be put in extreme conditions and the distance should be measured as the crow flies so as to keep everything the same. Results from preliminary work: 0�C 0cm 50�C 0cm 35�C 31cm 21�C 15cm. There was not enough time to repeat and check. The maggot's central nervous system should not react as quickly at fifty degrees Celsius and zero degrees Celsius. It has enzymes so at 50�C they should be denatured and at zero they should be too cold to function properly. Factors which must be kept constant: Light intensity Amount of water on tissue Place of measurement The only things that should change are the speed and temperature of the maggot. At the end the speed should rely on the temperature of the maggot. Obtaining Evidence The method in the plan was used in the experiment; however, some things were changed. The whole room had to be darkened for other experiments, therefore to keep constant light a lamp had to be put over the paper. ...read more.