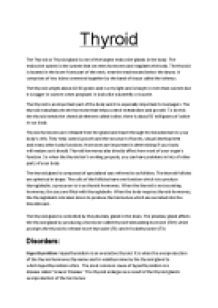 ﻿Thyroid The Thyroid or Thyroid gland is one of the largest endocrine glands in the body. The endocrine system is the system that secretes hormones and regulates the body. The thyroid is located in the lower front part of the neck, near the trachea and below the larynx. It comprises of two lobes connected together by the band of tissue called the isthmus. The thyroid weighs about 18-60 grams and is very light and is larger in men than women but it is bigger in women when pregnant. It looks like a butterfly or bowtie. The thyroid is an important part of the body and it is especially important to teenagers. The thyroid manufactures the hormone that helps control metabolism and growth. To do this the thyroid needs the chemical element called Iodine, there is about 50 milligrams of iodine in our body. Thyroid hormones are released from the gland and travel through the bloodstream to your body's cells. They help control growth and the structure of bones, sexual development and many other body functions. Hormones are important in determining if your body will mature as it should. ...read more.

Hypothyroidism: Hypothyroidism is the underproduction of the hormones thyroxine and tri-iodothyronine. Hypothyroidism disorder occurs when the thyroid gland is inactive or underactive as a result of improper formation from birth or the removal in whole or removal of part of the thyroid gland. Symptoms include: abnormal weight gain, tiredness, baldness, temperature intolerance (both hot and cold) and palpitations. Initial Hyperthyroidism followed by hypothyroidism: This is the overproduction of thyroxine and tri-iodothyronine followed by the underproduction of these hormones. There are two types: Hashimoto's Thyroiditis and Postpartum Thyroiditis. Hashimoto's Thyroiditis: is an autoimmune disorder whereby the body's own immune system reacts with the thyroid tissues. At the beginning, the gland is overactive, and then becomes underactive as the gland is destroyed resulting in too little thyroid hormone production or hypothyroidism. Hashimoto's is most common in middle-age females and tends to run in families. Postpartum Thyroiditis: occurs in some females following delivery. The gland gets inflamed and the condition initially presents with over activity of the gland followed by under activity. In some cases, the gland does recover with time and resume its functions. Enlargement of the thyroid: An enlarged thyroid gland can exist and not be considered hyperthyroidism. ...read more.

and larynx (voice box). 3. Then after that process had been completed I proceeded to make the Thyroid out of pink play dough and wrapped it around the trachea where it is located under the larynx. Then after that I punched holes into the play dough for the follicles. 4. Then I put the blue play dough to make rings around the trachea to make it look more realistic. 5. Then lastly I created the Carotid artery, superior thyroid arteries and the Interior thyroid arteries which have wire in them to stay upright. Problems encountered: I didn't have enough play dough to start off with and had to make some which was really soft and hard to mould, it also turned very dry and nothing would stick to it making it very hard to make and keep up right. The thyroid kept falling off the trachea and the arteries would not stick on and it was very time consuming in the end I had to put wire in the arteries to stick them in but still could not get them to keep their shape so I had to end up laying the model down. The end model was not what I had expected it to turn up right with all the problems encountered during the process. ...read more.