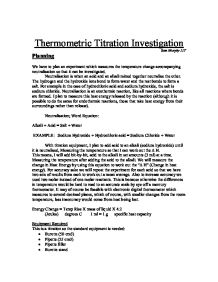 Thermometric Titration Investigation Sam Murphy 11T Planning We have to plan an experiment which measures the temperature change accompanying neutralisation so that it can be investigated. Neutralisation is when an acid and an alkali mixed together neutralise the other. The hydrogen and the hydroxide ions bond to form water and the rest bonds to form a salt. For example in the case of hydrochloric acid and sodium hydroxide, the salt is sodium chloride. Neutralisation is an exothermic reaction, like all reactions where bonds are formed. I plan to measure this heat energy released by the reaction (although it is possible to do the same for endothermic reactions, those that take heat energy from their surroundings rather than release). Neutralisation; Word Equation: Alkali + Acid = Salt + Water EXAMPLE: Sodium Hydroxide + Hydrochloric acid = Sodium Chloride + Water With titration equipment, I plan to add acid to an alkali (sodium hydroxide) until it is neutralised, Measuring the temperature so that I can work out the ? H. This means, I will add bit-by-bit, acid to the alkali in set amounts (3 ml) at a time. Measuring the temperature after adding the acid to the alkali. We will measure the change in Heat Energy by using this equation to work out the "? H" (Change in heat energy). For accuracy sake we will repeat the experiment for each acid so that we have two sets of results from each to work out a mean average. ...read more.

which means approximately equal amounts of each will create a neutral solution 4. Add the HCL to the NaOH, 3cm3 at a time. 5. After you have added some acid, stir the Polypot with the thermometer and quickly record the temperature and move on 6. Carry on until the change in temperature is small and several negative temperature change results are recorded, indicating the alkali has been neutralised Safety: * The acids that will be used are 2 molar, twice as strong as the usual strength used, this makes it far more important to use goggles and not to spill on clothes or you. * Check carefully to see if the burette is secure, if it isn't then it may fall and break, this would result in acid and glass shards on the desk and floor, not safe for reasons too obvious to mention. * Make sure the burette doesn't leak or drip. * You should always be standing during an experiment, but in this case, with stronger corrosive solutions, this becomes even more important. * This may not have much to do with the experiment, but while carrying the acids and alkalis around, remember to watch out for bags and stools or any obstacles which may cause you to trip up. * The thermometers we use contain mercury which is poisonous, but also, so is the vapour, so any fabric or other thing which soaks it up must be washed because it could give you poisoning, especially clothes. ...read more.

But it was all surprisingly accurate, the doubled results were all close together so that the fact they were not greatly different shows that they were either both wrong (unlikely) or most likely, both about right. Not being more precise than a millilitre when your dealing with three millilitres is bound to cause problems, same with a small range of temperatures. Altogether, taking into account: 1. Measuring to millilitres 2. Measuring to degrees C (not decimal places) 3. Dilution due to pipette / burette 4. Heat Loss 5. Human error on the burette tap (time and amount) 6. The specific heat capacity being a bit different 7. Splashing caused by stirring, reduces amount in pot Altogether it is about 10% accurate, considering some inaccuracies work against each other, like 4 and 6, using a lower specific heat capacity than you really have creates heat whereas 4 is about actually losing it. The graph was mostly accurate, and it showed up only one anomaly, though I have no explanation for it. Ideally, I would have a thicker poly pot with a lid. A magnetic stirrer would mix it, an electronic probe measuring to 2 decimal places stuck in the lid (same for the end of the burette) and a stop-clock to measure the interval of 20-30 seconds between adding the acid. Obvious further work would be trying out different combinations of acids and alkalis, but, you can also measure heat produced in other exothermic reactions, or try measuring the heat used by endothermic reactions. ...read more.

****
A good account of the investigation with useful background information. The author might have discussed variables in more detail and a bit of double checking should have avoided getting the specific heat capacity of water wrong.