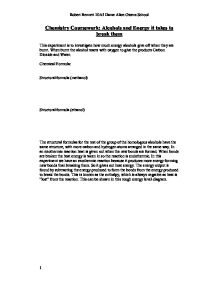 This experiment is to investigate how much energy alcohols give off when they are burnt. When burnt the alcohol reacts with oxygen to give the products Carbon Dioxide and Water.

Chemistry Coursework: Alcohols and Energy it takes to break them This experiment is to investigate how much energy alcohols give off when they are burnt. When burnt the alcohol reacts with oxygen to give the products Carbon Dioxide and Water. Chemical Formula: Structural formula (methanol) Structural formula (ethanol) The structural formulas for the rest of the group of the homologous alcohols have the same structure, with more carbon and hydrogen atoms arranged in the same way. In an exothermic reaction heat is given out when the new bonds are formed. When bonds are broken the heat energy is taken in so the reaction is endothermic. In this experiment we have an exothermic reaction because it produces more energy forming new bonds than breaking them. So it gives out heat energy. The energy output is found by subtracting the energy produced to form the bonds from the energy produced to break the bonds. This is known as the enthalpy, which is always negative as heat is "lost" from the reaction. This can be shown in this rough energy level diagram. Chemical Principles By Master & Slowinski suggest that heat used by products (Hp) subtracted by heat used for reactants (Hr) equals the enthalpy (? H). It can be shown in this chemical formula. ...read more.

Length of Wick: I don't have any control over this factor, other than the Burner that I am using, the wicks should all be about the same size anyway. However I will try and chose burners that have wicks roughly the same length. Preliminary Work: In my preliminary work I will be trying to find out what volume of water would be best to use and whether to use a tripod or a boss and clamp to hold the beaker in place. I will also be investigating the temperature change in the water and what mass of the alcohols I should be using. I need to decide how many alcohols to burn and also to see how far above the flame the beaker will need to be. I will also be investigating the material of the beaker that the water is held in and looking at the length of wick. Prediction of Diagram of Preliminary work: Results of Preliminary Work: I tried out two different volumes of water, 50ml and 100ml. 50ml of water reached the temperature very quickly and 100ml of water is easy to use in my enthalpy calculations. The length of wick couldn't be altered from the length that it was originally at. The distance of the wick from the bottom of the beaker could be altered easily. ...read more.

3) Set up the boss and clamp with the container 4.5cm above the wick of the burner. 4) Stir and record initial temperature of the water. 5) Light the wick immediately after I have done this and continue stirring the water. 6) As soon as the water has reached 20�C above the starting temperature blow out the wick and record the mass of the alcohol and burner. Throughout the test I will control the mass of water, 100ml, the same copper can and the wick 4.5cm from the bottom of the copper container. Predictions: I predict that alcohols with more carbon atoms in their chemical structure will produce more energy when their new bonds are formed. I predict that the alcohols with more carbon atoms such as Pentanol will produce more energy than an alcohol with less carbon atoms such as methanol. I also predict that the alcohols with more carbon atoms in their chemical structure will not have as much mass burned. This is because they are releasing more energy per gram than the alcohols with less carbon atoms in their chemical structure. Using the theoretical energy level diagram I can see how my results will come up against the theoretical ones. Alcohol Theoretical Energy Level Diagrams Results Methanol 666 kJ/mol Ethanol 1276 kJ/mol Propanol 1895 kJ/mol Butanol 2520 kJ/mol Pentanol 3138 kJ/mol Robert Bennett 10JR, 10A5 Robert Bennett 10A5 Dame Alice Owens School 1 ...read more.