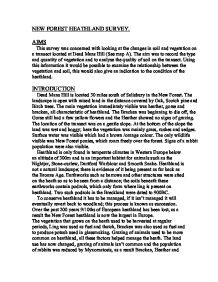 This survey was concerned with looking at the changes in soil and vegetation on a transect located at Dead Mans Hill (See map A). The aim was to record the type and quantity of vegetation and to analyse the quality of soil on the transect.

NEW FOREST HEATHLAND SURVEY. AIMS This survey was concerned with looking at the changes in soil and vegetation on a transect located at Dead Mans Hill (See map A). The aim was to record the type and quantity of vegetation and to analyse the quality of soil on the transect. Using this information it would be possible to examine the relationship between the vegetation and soil, this would also give an indication to the condition of the heathland. INTRODUCTION Dead Mans Hill is located 30 miles south of Salisbury in the New Forest. The landscape is open with raised land in the distance covered by Oak, Scotch pine and Birch trees. The main vegetation immediately visible was heather, gorse and bracken, all characteristic of heathland. The Bracken was beginning to die off, the Gorse still had a few yellow flowers and the Heather showed no signs of grazing. The location of the transect was on a gentle slope. At the bottom of the slope the land was wet and boggy; here the vegetation was mainly grass, rushes and sedges. Surface water was visible which had a brown /orange colour. ...read more.

To discover the pH of the soil the other half of the sample was used, 2cm3 of soil and 1cm3 of barium sulphate were placed into a test tube. The barium sulphate ensures the soil particles separate, this is known as flocculation. 10cm3 of distilled water and 5cm3 of an indicator solution were then added, the test tube was given a good shake then allowed to settle for 5 minutes. The colour of the water was compared against a colour chart, which gave the pH of the soil. From these results we could asses how fertile the soil was. To measure the gradient of the slope a 5m rope, spirit level and two 1m rulers were used. One end of the rope was held in place on the ground at sample station number 21, the rope was then pulled tight and leveled using the spirit level. The vertical distance between the ground at station 20 and the end of the rope was recorded. This was repeated all the way down the transect line, in-between each sample station. The results were plotted onto graph paper, which gave an impression of the gradient. ...read more.

A podzol is produced by a combination of acidic soil and Ling heather. The chemistry of Ling heather favours podzolization, rain dissolves organic acids out of leaf mould, leached humus and iron compounds out of the topsoil. These are deposited lower down in the soil and cement soil particles together to form 'pans'. These 'pans' or podzols are characteristic to heathland and slow down drainage 11. Next to these stations we observed Cross Leafed heather which prefers wet conditions and a reduction in Bell heather which prefers dry conditions. The bare ground recorded can be explained by trampling, from humans and the ponies, which live on the heath and tend to take the same route time and time again. CONCLUSION From the main findings such as the pH of the soil, vegetation distribution and the discovery of possible podzols we can conclude that the land studied is characteristic of heathland. From the information obtained, the heathland seems to be in good condition supporting a variety of plants, none of which seemed to be dominant. The heathland is being managed to maintain it; the ponies although having an impact couldn't be responsible on their own as their population isn't large enough. WORD COUNT 2022. ...read more.