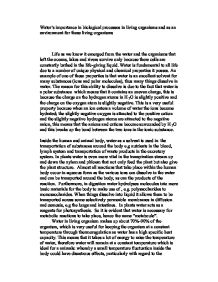 Water's importance in biological processes in living organisms and as an environment for these living organisms Life as we know it emerged from the water and the organisms that left the oceans, lakes and rivers survive only because there cells are constantly bathed in the life-giving liquid. Water is fundamental to all life due to a number of unique physical and chemical properties it posses. An example of one of these properties is that water is an excellent solvent for many substances (ions and polar molecules), thus many things dissolve in water. The reason for this ability to dissolve is due to the fact that water is a polar substance which means that it contains an uneven charge, this is because the charge on the hydrogen atoms in H2O is slightly positive and the charge on the oxygen atom is slightly negative. This is a very useful property because when an ion enters a volume of water the ions become hydrated; the slightly negative oxygen is attracted to the positive cation and the slightly negative hydrogen atoms are attracted to the negative anion, this means that the anions and cations become surrounded by H2O and this breaks up the bond between the two ions in the ionic substance. ...read more.

vaporization, so when we sweat we transfer a lot of energy into evaporating the liquid and subsequently it cools the body with a minimal water loss. Water is a cohesive substance whereby the molecules will stick together making it a substance which is not easily compressed thus making it ideal for the support role it plays in the plants transpiration stream. Also this cohesive property is vital in the development of a foetus, as the amniotic fluid in the amniotic sac is made up largely of water which gives support to the growing baby inside the womb. As water is a viscous substance it is ideal for lubrication within body for example pleural fluid is made up largely of water and it helps to minimise friction between the lungs and the rib cage. The properties that make water so fundamental in the biological processes of animals are the same properties that give water its ideal characteristics as a living environment upon which so many varieties of species thrive in. Water covers around 2/3 of earth and houses millions of animals all of which have evolved to use water's properties to gain the best chance of survival possible. ...read more.

force they exert on the water is less than the cohesion between the molecules and therefore the small inter-molecular hydrogen bonds are not broken and surface remains flat and strong enough for the insects to walk on. The volatility and stability of water is in fine balance with the changing of temperature of the earth so that a water cycle can be maintained whereby water is transported and deposited in different places feeding ecosystems everywhere. Sometimes waters life-giving properties can work in the opposite way intended and actually do damage for example because water is such a good solvent many harmful chemicals can pass into it unchecked and unseen and be transported very quickly doing damage to any ecosystems it comes across. An other example would be that because water so ideal for living in , it is a breeding ground for human harming bacteria which causes diseases such as cholera ,so people, particularly in third world countries, who don't have access to clean treated water will be afflicted with such diseases because they have to drink the dirty water in order to survive. Water is something we take for granted, we always expect it on tap and never truely give much though to the necessity of it, without water life would cease to exist. ...read more.