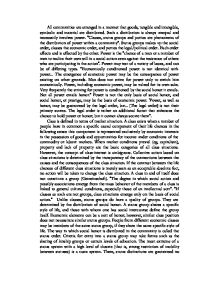 All communities are arranged in a manner that goods, tangible and intangible, symbolic and material are distributed.

All communities are arranged in a manner that goods, tangible and intangible, symbolic and material are distributed. Such a distribution is always unequal and necessarily involves power. ''Classes, status groups and parties are phenomena of the distribution of power within a community''. Status groups makes up the social order, classes the economic order, and parties the legal/political order. Each order affects and is affected by the other. Power is the ''chance of a man or a number of men to realize their own will in a social action even against the resistance of others who are participating in the action''. Power may rest of a variety of bases, and can be of differing types. ''Economically conditioned power is not identical with power... The emergence of economic power may be the consequence of power existing on other grounds. Man does not strive for power only to enrich him economically. Power, including economic power, may be valued for its own sake. Very frequently the striving for power is conditioned by the social honor it entails. Not all power entails honor.'' Power is not the only basis of social honor, and social honor, or prestige, may be the basis of economic power. 'Power, as well as honor, may be guaranteed by the legal order, but... ...read more.

''Parties reside in the sphere of power''. ''Parties are... only possible within groups that have an associational character, that is, some rational order and a staff of persons''. Parties aim for social power, the ability to influence the actions of others, and thus may exist in a social club, the state, or a cohort of graduate students at the University of Chicago. Parties may represent class or status interests, or neither. They usually represent a mix. ''The structure of parties differs in a basic way according to the kind of social action which they struggle to influence.... They differ according to whether or not the community is stratified by class or status. Above all else, they vary according to the structure of domination''. Weber differed only marginally from Marx when he defined as a class a category of men who, "have in common a specific causal component of their life chances, in so far as this component is represented exclusively by economic interests in the possession of goods and opportunities for income, and it is represented under the conditions of the commodity or labour market." He was even fairly close to Marx's view, though not necessarily to those of latter-day Marxists, when he stated that class position does not necessarily lead to class-determined economic or political action. ...read more.

Although he agrees with Marx in crucial respects, he refines and extends Marx's analytical scheme. For Marx, power is always rooted, even in only in the "last analysis," in economic relations. Those who own the means of production exercise political power either directly or indirectly. Weber agreed that quite often, especially in the modern capitalist world, economic power is the predominant form. But he object that, "the emergence of economic power may be the consequence of power existing on other grounds." For example, men who are able to command large-scale bureaucratic organizations may wield a great deal of economic power even though they are only salaried employees. Weber understands by power: the chance of a man, or a number of men "to realize their own will in communal action, even against the resistance of others." He shows that the basis from which such power can be exercised may vary considerably according to the social context, that is, historical and structural circumstance. Hence, where the source of power is located becomes for Weber an empirical question, one that cannot be answered by what he considers Marx's dogmatic emphasis on one specific source. Moreover, Weber argues, men do not only strive for power to enrich themselves. "Power, including economic power, may be valued 'for its own sake.' Very frequently the striving for power is also conditioned by the social 'honor'. ...read more.