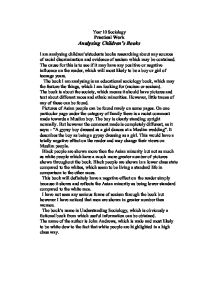 Year 10 Sociology Practical Work Analysing Children's Books I am analysing children's/students books researching about any sources of racial discrimination and evidence of sexism which may be contained. The cause for this is to see if it may have any positive or negative influence on the reader, which will most likely to be a boy or girl of teenage years. The book I am analysing is an educational sociology book, which may the feature the things, which I am looking for (racism or sexism). The book is about the society, which means it should have pictures and text about different races and ethnic minorities. However, little traces of any of these can be found. Pictures of Asian people can be found rarely on some pages. On one particular page under the category of family there is a racist comment made towards a Muslim boy. The boy is clearly standing upright normally. But however the comment made is completely different, as it says: - "A gypsy boy dressed as a girl dances at a Muslim wedding". ...read more.

poor, rich, dirty etc.). Chapter and category of book. No. of whites shown No. of blacks shown. No. of Asians shown. What conditions they are in. 1. Introduction 100 1 2 Whites shown in a clean environment (teachers on strike) Asians shown sniffing glue. Black shown caught doing anti- social behaviour. 2.Sociological research. 6 0 3 Whites shown doing work. Asian boy shown appearing to be dressed as girl according to author. 3. Education 10 0 8 Whites shown at work or at school. Blacks shown to be "gang like" two boys appearing to be wearing torn uniform. 4. The family 9 5 0 Whites shown in a posh atmosphere. Blacks shown opposite (in poor atmosphere). In terms of pictures, whites are presented as being very responsible, clean, posh etc. Most of the jobs they do are of high standards and they seem to be in an environment, which is dirt-free. The black race is shown as being in a lower class family. ...read more.

The best that I can point out is a black man as a priest doing a presentation to the Christian audience. This is quite rare and is a very good encouragement for religious black people. The book I have studied has a very influential touch to the reader, especially to the students. This is mainly for two reasons: 1. It is Sociology book which is a book teaching the students mainly about the rules and regulations of the society. 2. And also because of what the book contains towards black and ethnic minorities. I definitely would not recommend this book to others because of it's biased and unreliable sources of information and images it contains. This book will have a negative impact on the reader and possibly make the reader have a different view of several topics for example towards black teenagers and Asian traditions. In my opinion I think that it is very important for schools to supply positive books to students, which supply information which is reliable and clean from the forms of racism or sexism. Masum Ahmed 10c h/w 21/03/02 ...read more.