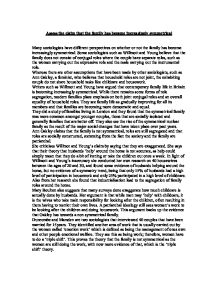 Assess the claim that the family has become increasingly symmetrical Many sociologists have different perspectives on whether or not the family has become increasingly symmetrical. Some sociologists such as Willmott and Young believe that the family does not consist of conjugal roles where the couple have separate roles, such as the women carrying out the expressive role and the male carrying out the instrumental role. Whereas there are other assumptions that have been made by other sociologists, such as Ann Oakley, a feminist, who believes that household roles are not joint, the cohabiting couple do not share household tasks like childcare and housework. Writers such as Willmott and Young have argued that contemporary family life in Britain is becoming increasingly symmetrical. While there remains some forms of role segregation, modern families place emphasis on both joint conjugal roles and an overall equality of household roles. They see family life as gradually improving for all its members and that families are becoming more democratic and equal. They did a study of families living in London and they found that the symmetrical family was more common amongst younger couples, those that are socially isolated and generally families that are better off. ...read more.

They see this as being work; therefore, women have to do a 'triple shift'. This proves the theory that the family is not symmetrical as the women are still doing the work, with now more evidence of that, which is the 'triple shift' theory. Another feminist that would back up Oakley's theory of the non symmetrical family is Pahl (1993) who interviewed 102 couples with children, she saw together and alone. She focused on how each partner's contribution to family income effects the decision making within the family. The results of her research showed that the husband controlled pooling was the most common, this means that the money is shared but the husband has the most control and the wife had a lower income. She also found that the situation where the wife had control was the least common. Therefore in over a quarter of couples there is some equality but in most cases had more power. This proves the theory that industrialisation plays a major part in the segregation, as the husbands are the main breadwinners therefore giving them more power in financial issues, thus enforces women's economic dependence on men. ...read more.

Where as if Oakley had taken a sample from a more remote area, her results may have been different, as there would be less pressure on the family. The only survey that can really prove any claim to represent everyone is the British Social Attitudes Survey which used a much larger sample of people (around 3000) and used careful sampling techniques. There are also criticisms of Duncombe and Marsden which are that as well as Oakley only interviewed 40 couples which is a too small sample to apply to everyone in Britain. Aswell as this they interviewed the couple's together, therefore putting pressure on the wives to say that their husbands did more than they actually did. In light of the above evidence, women are still a long way away from real symmetry of roles in the family, as proved by Oakley, Pahl, Edgell and Duncombe and Marsden. All these sociologists have given some kind of evidence towards the fact that there has been a slight movement toward equality, but ultimately women still take the prime responsibility for the household tasks and childcare, and they still have less power in the relationship within the family and economically. All of this evidence towards a non symmetrical family has disproved Willmott and Young's theory of symmetry in the family, although not completely. ...read more.