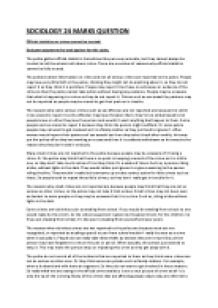 Can official statistics on crime be trusted?

﻿SOCIOLOGY 24 MARKS QUESTION Official statistics on crime cannot be trusted. Evaluate arguments for and against for this claim. The police gather official statistics. Sometimes they are very accurate, but they cannot always be trusted to tell the whole truth about crime. There are a number of reasons why official statistics cannot be fully trusted. The policed collect information on crime and not all serious crimes are reported to the police. People may have very little faith in the police, thinking they might not do anything about it, so they do not report it as they think it is pointless. People may report it but have no witnesses or evidence of the crime so then the police cannot take action without having any evidence. People may be unaware that what is happening is a crime so they do not report it. Crimes such as sex assault by partners may not be reported as people may be scared to get their partner in trouble. The reasons why some serious crimes such as sex offences are not reported are because the victim is too scared to report it as the offender may have threaten them, they?re too embarrassed to let people know or either they love the person and wouldn?t want anything bad happen to them. ...read more.

They would rather just ignore it or give a warning to the person riding the bike. They wouldn?t really lock someone up or take serious action for little crimes such as these. So people tend to repeat these little crimes, as they don?t really get in trouble for it. The reasons why small crimes are not reported are because people may think that they are not as serious as other crimes, so the police may not take it that serious. Small crimes may not been seen as deviant to some people or they may be unaware that it is a crime. Such as, riding a bike without lights in the dark. Some crimes are victimless such as stealing from school. If you would be stealing from school no one would really be the victim. As the school equipment is given by the government, for the children. So if you are stealing from school, it?s like you?re stealing from yourself and your peers. The reasons why victimless crimes are not reported to the police are because most are not recognised, or reported as stealing a pencil or pen from school wouldn?t really be seen as a crime when it actually is. ...read more.

Or low chance of clear up, so they doubt they could solve the case. Also it may be expensive in time and labour to investigate so they may not bother to investigate it. Although crime statistics are useful in many ways because they are made by the government they could be a possibility that the statistics are politically biased to make the government at the time look good. Also to make people think what the government wants them to think. So the statistics may be shaped how the government may want us to think. They cannot be fully trusted because people do not report all of the crimes that occur and the police do not record all of the crimes that are reported to them. So really what we are seeing in the official crime statistics is not a true picture of crime at all- it is only the tip of the ice berg. Many of the crimes that are affecting people day to day are referred to by sociologists as the ?dark figure of crime?. They are crimes we know a little about as they do not feature in the official figures. ...read more.